U.S. Rep. Jeff Denham (CA-10) recently announced that the Congressional Veteran Jobs Caucus, which he co-chairs, has introduced the United We Stand to Hire Veterans Act. Along with U.S. Senators Mark Kirk (R-Ill.), Joe Manchin (D-W.Va.) and Tim Walz (D-Minn.), the group describes its legislation as “a bipartisan, bicameral bill that would streamline and consolidate duplicative government job portals to better connect current and former members of the Armed Services with employment opportunities.” Denham’s press release is prominently featured on his website. 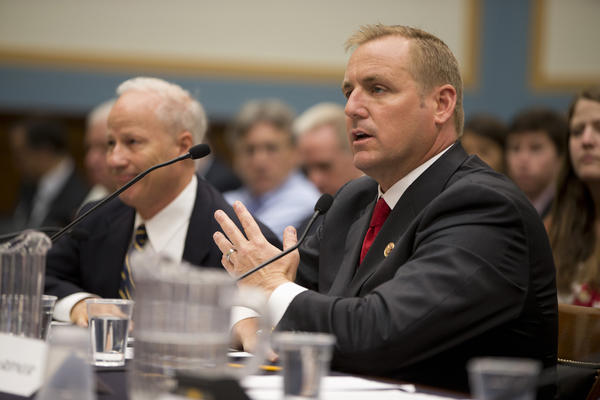 Three weeks ago, however, Denham co-sponsored House Minority Speaker Nancy Pelosi’s H.R. 15 which would grant amnesty to between 11 and 20 million illegal aliens. Once given legal immigrant status, the formerly unemployable aliens (because of their immigration status) will enter the labor market to compete with 20 million jobless Americans. This includes the very veterans Denham allegedly worries about. Furthermore, H.R. 15 would issue visas to about 20 million skilled and unskilled overseas workers during the next two decades, further diminishing the employment possibilities for America’s jobless.

When he joined Pelosi’s team, Denham, the first of three Republicans to sign H.R. 15, immediately became the darling of the most influential Capitol Hill amnesty lobbyists, including LULAC, America’s Voice and the National Immigration Forum.

H.R. 15 works against the struggling veterans that Denham insists he wants to help. Since the creation of new, well-paying jobs in Modesto is unlikely, a quicker path to employment would be a tight labor market where available employees are scarce. Amnesty expands the labor market, and minimizes opportunities for the unemployed. Modesto, the largest city in Denham’s district, has a 12 percent unemployment rate, about five points higher than the national average and three points higher than California’s.

Even the employed are at risk when amnesties pass. Nobel Prize-winning economist, New York Times editorial writer and self-described liberal Paul Krugman summed it up:

Immigration reduces the wages of domestic workers who compete with immigrants. That’s just supply and demand: we’re talking about large increases in the number of low-skill workers relative to other inputs into production, so it’s inevitable that this means a fall in wages.

To keep his promise to veterans and his other unemployed constituents, Denham should remove his name from H.R. 15.

The CAPS ad will be broadcast in Modesto through December 8. Listen to it here.