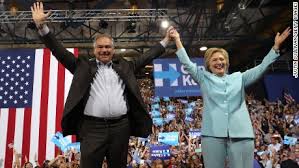 On July 24, 2016, Hillary Clinton joined Virginia Senator Tim Kaine, her Vice-Presidential candidate for a joint interview by Scott Pelley, correspondent for the CBS News program, 60 Minutes. That interview has been posted under the title, “The Democratic Ticket: Clinton and Kaine.”

During that interview, when asked about her goals she said, in part:

Pelley should have asked how her adamant support for Comprehensive Immigration Reform (CIR) would help unemployed Americans find jobs and raise the wages of millions of American workers who are fortunate to still have jobs. CIR would result in the dumping of millions of newly authorized foreign workers into an overflowing labor pool that, by Clinton’s own admission, has not seen incomes rise, with millions of people currently live in poverty.

In point of fact, already the number of authorized foreign workers who enter the United States each month exceeds the number of new jobs that are created.

The question never asked about wage equality is with whom would she make American workers equal?

Today middle-class wages are in decline, and the middle class is no longer the majority economic class in major U.S. cities such as Los Angeles, Houston and New York.

Furthermore, what is important to note is that the massive importation of foreign workers under the auspices of the H-1B Visa Program has already cost hundreds of thousands of highly qualified and experienced American workers their jobs and has suppressed the wages of those who still have their jobs.

On April 30, 2009, the U.S. Senate’s Subcommittee on Immigration, chaired by Senator Chuck Schumer, conducted a hearing on the topic: “Comprehensive Immigration Reform in 2009, Can We Do It and How?” Among the witnesses called to testify before that hearing was Alan Greenspan, former Chairman of the Federal Reserve Bank and arguably one of the key architects of the current, ongoing economic crisis. His testimony supported the notion of hiring illegal aliens whom he referred to as a flexible labor force and then came out in support of greatly expanding the infamous H-1B Visa Program at the behest of Bill Gates.

Greenspan's testimony about the “benefit” to be gained by greatly expanding the H-1B Visa Program included this:

“The second bonus would address the increasing concentration of income in this country. Greatly expanding our quotas for the highly skilled would lower wage premiums of skilled over lesser skilled. Skill shortages in America exist because we are shielding our skilled labor force from world competition. Quotas have been substituted for the wage pricing mechanism. In the process, we have created a privileged elite whose incomes are being supported at noncompetitively high levels by immigration quotas on skilled professionals. Eliminating such restrictions would reduce at least some of our income inequality.”