Recently I read a figure I found quite shocking, given my memories from childhood. When I was a kid in the 1950s, I was totally fascinated by African wildlife, particularly the big cats, lions, leopards and black panthers. I constantly looked through magazines to find pictures of them to put in my wildlife scrapbook.

The male lion, with his regal mane, captivated my thoughts as I imagined him striding across the wild and endless African savanna. But that impression was hardly my own. This King of Beasts has been an icon of majesty and power for people of just about every background and nationality through the centuries. 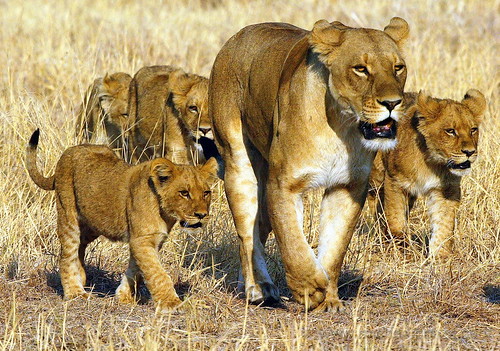 When I was collecting for my scrapbook in the 50s, as many as 500,000 lions were roving freely in sub-Saharan Africa. What shocked me so much was the present estimate of their numbers, probably no more than 30,000, or perhaps as few as 20,000. It is possible that the African lion could face extinction by 2050 – just 35 years from now.

Among those sounding this alarm in the United States is Dan Ashe, director of the U.S. Fish and Wildlife Service (FWS). That agency hopes to lend assistance to lions by listing them as “threatened.” That would allow the agency to support conservation efforts in Africa and restrict the sale and traffic of lion trophies in the U.S.

Trophy hunting by outsiders is a problem, but it is far from the main problem. The FWS, reports an article in Scientific American, sees three primary dangers to African lions. These are: “habitat loss, loss of their prey base to the bushmeat trade, and human-lion conflict.”

The article adds: “All three threats are inexorably linked. The human population of sub-Saharan Africa is expected to double by the year 2050, which will result in more conversion of habitat to agriculture, more hunting of the wild [animals] the lions depend upon for prey, and more instances of lions killing livestock and then being killed in retaliation.”

In 1950, when there were perhaps a half-million lions south of the Sahara Desert, the sub-Saharan human population was only 180 million. Today it is around 900 million, and – according to the Washington-based Population Research Bureau – it could go as high as 2.2 billion by 2050 and to 4 billion or more by the end of this century.

This is bad news for the survival of lions, and it is not good news for Africa’s humans either. As a recent article in The Economist observes, “The prospect of so rapid a rise has triggered a host of Malthusian fears, on the continent and elsewhere. If Africa is struggling to feed a billion people, it is hard to see how it could feed 4 billion in the future.”

But the good news, or at least potentially good news, is that these projections are not set in stone. Skyrocketing population growth in Africa does not have to happen. Voluntary family planning can check growth and keep it at a more benign level. Toward this goal, the Bill & Melinda Gates Foundation has an initiative to provide African women with access to modern contraceptives, currently used by under 20 percent of women there.

It is perhaps understandable that we human beings want the lion’s share of opportunities and resources for our purposes, but surely we can limit ourselves so that we might share a common existence with the lion and other creatures of the wild. A world bereft of the wild kingdom – including the King of Beasts – would be a sad and lackluster world for people.