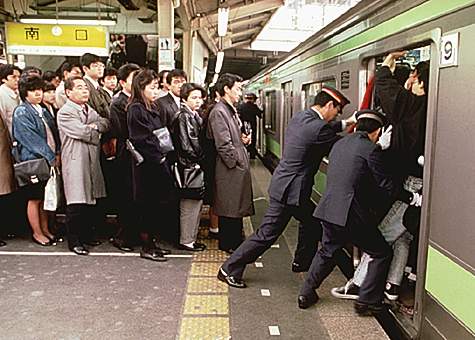 The Economist recently published a doom-and-gloom piece about Japan’s shrinking population, which declined by 224,000 people last year. While worldwide population is growing by about that many people every day, growth mongers at The Economist are aghast that a country could embrace returning to a sustainable population level. They lament the projection that Japan’s population will sensibly decline by 40 million people by 2060.

Fortunately, Japan has embraced a rational population policy which includes a near-zero immigration rate – something the United States and Europe must consider if sustainability is to remain an achievable goal. Approximately two percent of Japan’s population is foreign, although this includes large numbers of permanent Chinese and Korean residents who have lived in Japan for generations.

Writers at The Economist, and even some shortsighted leaders within Japan, wish to return to a policy of growth-at-any-cost. The article notes that:

The United Nations estimates that without raising its fertility rate, Japan would need to attract about 650,000 immigrants a year. There is no precedent for that level of immigration in this country, which is still a largely homogenous society.

The increasingly nonhomogenous U.S. population is projected to double this century, driven primarily by mass immigration. That will mean more roads, houses, cars, schools, hospitals and prisons, and increased demand for water, electricity and oil. The opposite is occurring in Japan, which will need less of everything. In return, the Japanese can look forward to sustaining ecosystems, a better quality of life and more room for nature and open spaces.

Japan will realize tangible benefits on the path to sustainability. While Japan has sizeable annual renewal water resources, the largest dam in Japan – the Arase Dam in Kumamoto Prefecture – is now being demolished. One of the driving factors for this removal is projected population decline.

Japan’s gasoline consumption averages approximately 883 thousand barrels of gasoline per day. With a 32% population drop, it can be expected that a savings of 353 thousand barrels per day will be obtained. The average Japanese person eats slightly more than his own weight (70.6 kg) of seafood every year. Thus a reduction of 40 million people will result in a reduced yearly consumption of 282.4 million kilograms of fish. This surely will go a long way toward replenishing depleted fisheries.

A critical motivating factor for the Japanese undoubtedly must be the Fukishima catastrophe. After the Fukishima incident, Japan shut down all of its nuclear reactors at least temporarily and is planning to eliminate the need for nuclear energy by the 2030s. Popular opinion now overwhelmingly opposes the use of nuclear power. It logically follows that fewer people will require less energy, no matter what the source.

The Economist conveniently forgets that national fertility is determined by decisions of individual women as to whether and when to have a child, not by economists seeking infinite growth within a finite country. It is abundantly clear that individual Japanese have chosen a low-fertility route to a less populous, more sustainable and more desirable future.