During the more than 20 years that I taught English as a Second Language in California’s San Joaquin Valley, I made a special point to explain to my students the significance of some major national holidays. While most understood Thanksgiving and Christmas, few knew who America honors on Memorial Day – the women and men who perished in the countless U.S. wars over the decades to preserve the rights and freedoms that drew my immigrant class to America.

Most of my students were Vietnamese, Southeast Asian war refugees. During the two-decade long Vietnam conflict, my generation’s war, more than 58,000 Americans and at least a million Vietnamese soldiers and civilians died. The Americans killed in Vietnam were, I told my students, just like the women and men living next door and going about their everyday lives. The difference was that they had been drafted or enlisted in the military service to fight for our country. Many but not all of the future soldiers realized the life-threatening mission they were about to embark on. 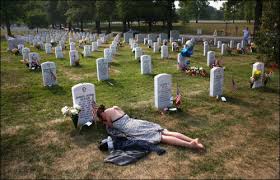 I told my students about the Vietnam Veteran’s Memorial, located in Washington, D.C. and more commonly known as “The Wall.” The best word to describe my trips to the wall is chilling. Two hundred women’s names are listed on the wall’s black granite surface. Among them are nurses, 1st Lt. Sharon Ann Lane, 26; 2nd Lt. Pamela Dorothy Donovan, 26, and Captain Mary Therese Klinker, 27. Captain Klinker, posthumously awarded the Airman’s Medal for Heroism and the Meritorious Service Medal, was killed in a plane crash while evacuating Vietnamese orphans, Operation Baby Lift.

Among the men, 20-year-old Dwight Herbert Bell, married, served less than four months before multiple enemy shell fragments killed him. Carl Ray Barnhart, 18 and single, had been in Vietnam less than three months before he became a ground casualty.

The wall’s website disabled guest comments years ago. Before it did, I found this: “I am looking for anyone who knew my dad in Vietnam. I would love to hear from you and know about my Dad’s time there and what he was like. I was two years old when he died over there. Please someone respond back. I want Dad back.” For too many, the Vietnam War never ends.

This weekend and throughout the year, let’s pray that our vets didn’t die in vain.