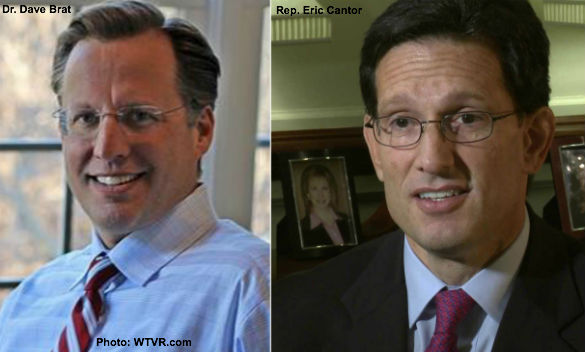 House Majority Leader Eric Cantor (R-Va.) lost his seat in Congress on June 10, 2014, to economics professor Dave Brat. This is the first time since 1899 that a sitting House majority leader has been ousted. It is a monumental event.

Even though Cantor was considered to be a shoo-in by almost everybody, he still outspent Brat by a factor of more than ten to one. Indeed, Cantor spent more at steakhouses than Brat spent on his entire campaign!

As The Washington Times pointed out, Sen. Richard J. Durbin (D-IL) thinks it was because while Cantor was in favor of amnesty for illegal aliens, he wasn’t sufficiently fervent in advocating his position. The New York Times threw up a red-herring accusation of anti-Semitism, which they immediately discounted in the same breath. The head-in-the-sand pundits are still trying to dredge up any old explanation for the upset, except the clearly obvious, which is that Cantor was in favor of amnesty. Brat vociferously opposed it.

As a result, voters overwhelmingly supported Brat and gave Cantor the boot.

The message of this election is irrefutably clear: when voters have a chance to vote against open borders and unending mass immigration, they will turn out in strong numbers to do so. As Donald Trump observed, this election sends a clear message to incumbents: if you support amnesty, you, too, are vulnerable.