When I blog, it will be almost exclusively about the United States, one of the three most overpopulated nations.

That is due to our high numbers – third only behind China and India – our huge environmental footprint and that sleek, new side-by-side refrigerator I bought last spring.

Al Bartlett, professor emeritus in physics at the University of Colorado, was a leading population and environmental activist until his death in 2013. He called us “innumerate” to numbers and population; what illiterate is to words.

Half of all global growth in recent years happened in just eight nations: India, Pakistan, Nigeria, China, the United States, Bangladesh, Ethiopia and the Democratic Republic of the Congo – in that order. 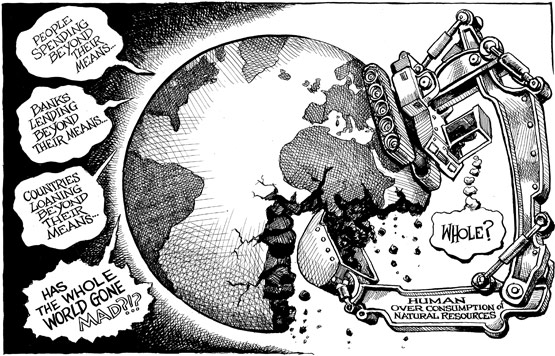 We innumerate Americans would likely list any of those nations as “overpopulated,” except our own. But due to our high numbers and our high standard of living, it is we, not the people of developing nations, who deliver an environmental body blow to the planet. And no, making do with less as our numbers explode – largely from people moving here from low-carbon, low-environmental footprint nations – accomplishes nothing.

A doctor friend of mine, years ago, was scolded by an American-educated chieftain of an African village for trying to implement a family-planning program. The chieftain reminded him that his people lived in mud huts, walked miles for water and had no electricity.

“You Americans live in huge houses, compared with ours, with central air and two or three cars in the driveway. Prius or gas-guzzler, it’s all the same. It is you, not us, even with our many children, who are the problem.”

That was about the same time the British Royal Academy of Sciences tried to make a correlation between children born in a developing nation and children born in a developed nation, like the United States – hard to pin down due to sharp variations in consumption patterns between nations and people. But, some estimates showed one American child equal to dozens – or a hundred or more – in impoverished, developing nations, part of why executive director of the Sierra Club Carl Pope, at the time, called ours “the world’s most overpopulated nation.”

Back to that refrigerator.

Due to health issues, medications and shakiness, I decided in March that a refrigerator with an icemaker was “needed.” Almost to the day of getting what I have come to call “Fantasmogysmo” – a magnificent, sleek monstrosity so large we had to shave kitchen cabinets so it would fit – I received a population article from Population Media on how that refrigerator uses more energy in a year than does the average Kenyan – for all uses!