The link between high population growth and stress on the environment should be obvious for anyone to see. Unfortunately, a lot of influential people wear self-interested blinders that prevent vision on this matter. Business interests want cheap labor and bigger markets at all costs, including the cost of environmental degradation. Ironically, many self-professed environmentalists are blind as well, rendered sightless by their dogma that concern about too many people is an affront to “social justice.”

This common blindness in the United States and other Western countries, however, was not always the case. During the 1960s and for several decades thereafter, many prominent and well-respected people warned of the problems associated with overpopulation.

Since then, it has become obvious that mass immigration is the greatest factor driving population growth in the West. But the sensitivities surrounding the issue of immigration have induced even more willful blindness on the topic of overpopulation. 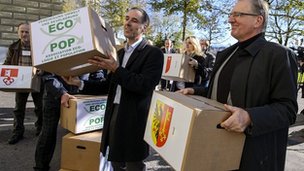 But just recently in Switzerland, a glimmer of the obvious managed to pierce through the blindness. There an initiative entitled “Stop Overpopulation – Safeguard Our Natural Resources” is scheduled for a national vote on November 30, after garnering 120,000 signatures to appear on the ballot. The initiative, sponsored by an environmental group called Ecopop, would reduce immigration to an annual level of 0.2 percent of Switzerland’s resident population of eight million, a total of 16,000.

Another provision would promote population stability in developing countries, by allocating 10 percent of Swiss foreign aid to promote voluntary contraception.

Since 1990 the country’s population has risen almost 20 percent to eight million, an increase largely driven by immigration. Foreigners, 84 percent of whom come from other European countries, make up almost a quarter of Switzerland’s population. Supporters of the initiative argue that the small mountainous country needs to restrict growth not only to protect its environment, resources and infrastructure, but also to keep the price of real estate at affordable levels for most Swiss citizens.

The qualification of the initiative for the ballot has roused opposition from Switzerland’s economic elites who, just like the ones here in the U.S., cry out in Chicken Little fashion that cutting immigration will doom the economy. Leftists denounce immigration restriction as racist, even though the great majority of immigrants are European. On the foreign aid provision, a socialist lawmaker stated that Switzerland should push human rights rather than contraceptives. She didn’t explain how offering contraception to people who want it is inconsistent with their rights.

According to polls, the initiative faces an uphill fight for approval. But regardless of the outcome, its supporters are encouraged that overpopulation, particularly as the consequence of immigration, is at last in full view for the Swiss people to discuss. Perhaps what is becoming obvious to many in Switzerland will become obvious to many others – here in the U.S. and elsewhere – who have both the eyes and the honesty to see it.