LOS ANGELES — When Alberto Fraire drives past a police car these days, he no longer worries about steep fines, or perhaps being hauled to jail and tangling with the immigration system. When California began issuing driver’s licenses to undocumented immigrants this year, he was one of the first in line.

“There’s a huge sense of relief now; it’s a psychological thing,” said Mr. Fraire, 37, who came to the United States with his parents from Mexico more than 25 years ago and recently leased a new black BMW to celebrate receiving his license in May. “I am not completely secure, but I don’t have to worry every time I get into my car.”

Mr. Fraire is part of an extraordinary milestone. In the first six months of this year, more than half of the new driver’s licenses issued by California went to undocumented immigrants like him.

Even now, months after the program went into effect, lines regularly begin at the Department of Motor Vehicles in Los Angeles by 6 a.m., a sign of the continuing changes in the state’s population. D.M.V. officials predict that they will issue nearly 1.5 million licenses to undocumented immigrants within three years. Of the 883,000 total licenses issued from January to the end of July, 443,000 were granted to undocumented immigrants, the officials said. 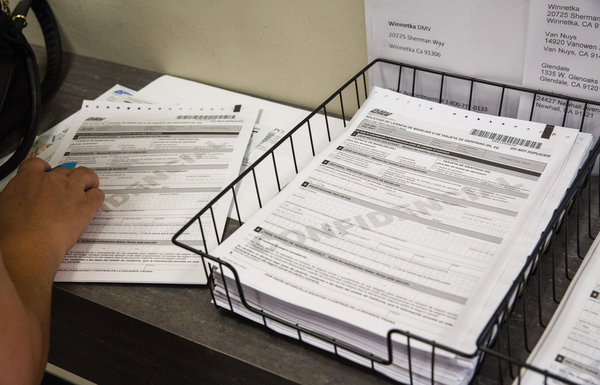 More than half of all new driver’s licenses issued in California since January, when the new law went into effect, have gone to people in the country illegally.CreditMonica Almeida/The New York Times

Many in the state applaud the license program, as well as other efforts by California to integrate undocumented immigrants into the economy, saying it simply reflects the demographic reality. California is home to nearly three million illegal immigrants, about 25 percent of all such immigrants in the country. More than half of the state’s residents are immigrants or children of immigrants, with Latinos making up the largest ethnic group.

While an overhaul of the nation’s immigration laws has languished in Congress, many undocumented immigrants have established themselves in California over decades. Thanks to recent legislative measures, they can receive financial aid and student loans to attend state universities and can be approved to practice more than 40 professions, including law, architecture and dentistry.

Mr. Fraire, for example, works as an electrician and plans to apply for a contractor’s license so he can open his own business.

Most of the immigrant drivers who are now getting their licenses have been on the roads for years, usually driving registered cars with insurance to minimize the possibility of steep fines or of having their cars impounded.

But critics say that with measures like the driver’s license program, the state is interfering with federal policy. They argue that such laws will only entice more immigrants to enter the country illegally, increasing the need for public spending.

“It creates even more of a magnet in what is already basically a sanctuary state,” said Joe Guzzardi, a spokesman for Californians for Population Stabilization, which advocates stricter immigration policies. “These are very tangible rewards to people who have knowingly and willingly violated the law.”

Still, nearly 65 percent of the state’s residents see immigrants as a net benefit to the state, according to a January poll by the Public Policy Institute of California, a San Francisco-based research group. Many of the laws offering benefits of various kinds have sailed through the State Legislature with little controversy, often with support from both parties. 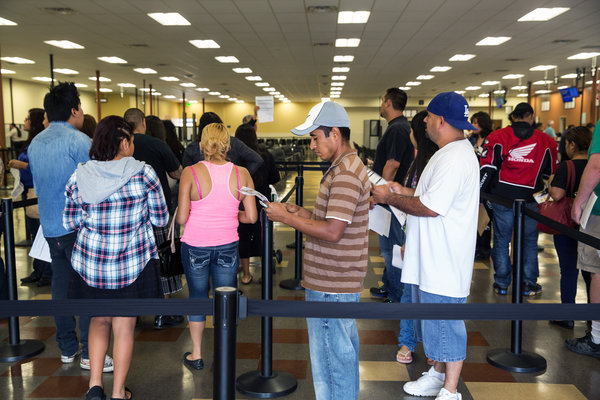 California is hardly alone in offering benefits to undocumented immigrants; a dozen states allow them to get driver’s licenses, and more offer in-state tuition rates at public universities. But no other state’s efforts come close to the breadth of those California officials have pursued.

Under the budget approved this year, children from low-income families, regardless of their immigration status, will receive subsidized health care. Lawmakers are also considering legislation to allow undocumented immigrants to pay for health insurance through the state’s public exchange. And a bill that would give agricultural workers permits and protect them from deportation, the kind of policy that has historically been in the federal domain, cleared its first legislative hurdle with nearly unanimous support. Huntington Park, a suburb of Los Angeles, is moving this week to appoint undocumented immigrants to two unpaid advisory board positions.

“If Congress isn’t going to act, this state will find its own way,” said Assemblyman Luis Alejo, a Democrat and the author of the driver’s license legislation and the agricultural bill.

The shift in public opinion also reflects the demographic transformation of the state.

“Most Latinos know somebody who is undocumented, and we’re not some marginal community,” said Angelica Salas, the executive director of the Coalition for Humane Immigrant Rights of Los Angeles, which has lobbied for many of the state programs. “We’re really just going to some level of common sense. We’ve done in-state tuition and professional licenses for more than a million people. Lives have changed significantly, and the sky has not fallen.”

In other states, there has been greater resistance. For example, in Connecticut, which began offering driver’s licenses to undocumented immigrants this year, there was an initial surge in applicants, leading to complaints about long delays for permits and driver’s license exams. The state’s General Assembly expected 54,000 applications in the first three years; nearly 50,000 were submitted in the first six months.

Maryland has issued roughly 60,000 licenses to undocumented immigrants since January 2014, while Colorado has given out about 10,000.

In 2013, after California’s Legislature approved the plan to issue the licenses, officials spent nearly a year working out the details, including what the licenses would look like and what identification documents would be accepted. Initially, officials worried that eligible immigrants would not try to obtain licenses for fear that it was a trap. Instead, in January, when the licenses became available, the morning lines of applicants stretched around D.M.V. offices. The state hired 1,000 new workers and opened four offices that are intended specifically to help with the new licenses and that remain open as late as 10 p.m.

“Right now, we only drive if there is no other choice, but that is often,” said Roberto Tadeo, 40, as he waited to take his written exam one recent morning. Mr. Tadeo had spent the last hour driving from his home in South Los Angeles to a new D.M.V. office in the city’s northern suburbs. Clutching the Mexican passport he used to prove his identity, he looked over his road sign flashcards one more time. “Now I have to prove I’ve been doing it safely all this time.”

An article on Sunday about a surge of undocumented immigrants applying for driver’s licenses in California misstated the percentage of all illegal immigrants living in the state. It is about 25 percent, not 40 percent.