Californians for Population Stabilization Aim to Win the Numbers Game

Among the many Santa Barbara groups outspoken on immigrant issues, one voice stands out. Californians for Population Stabilization (CAPS) is a nonprofit organization with national reach and more than half a million members who feel “runaway population growth” is responsible for what they see as California’s greatest crises — air and water pollution, clogged roads, and overcrowded schools. CAPS advocates for tougher border laws and domestic policies that shield legal California residents from the influence of outsiders.

CAPS often finds itself fighting an uphill battle, existing as it does in a liberal city in a Democratic state. But with the election of Donald Trump, who made mass deportations and a wall along Mexico his biggest presidential selling points, the organization has found new life and new supporters. We spoke last week with CAPS spokesperson Joe Guzzardi about his group’s core beliefs and policy ideas. This is an edited version of our conversation. 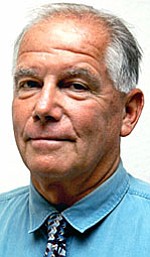 Is Trump the answer to all your prayers? We’re happy that immigration is finally back in the national spotlight and getting the attention it deserves. There’s been a steadfast refusal by both Republican and Democratic administrations to enforce immigration laws. Open-border advocates have had their way for three decades, and now that Trump has come along, they’re getting hit with a ton of bricks.

What should be the goal of immigration law reform? To create a system that would be a stronger one for the U.S. economy. People who come into the U.S. should be in a position to contribute. They should have an easily identifiable skill set.

If you were on Trump’s team, how would you advise him to do that? Move quickly on mandatory E-Verify [which proves a worker’s legal status by comparing information on the person’s I-9 form to data from Homeland Security and the Social Security Administration]. E-Verify would take away lots of problems both in terms of illegal immigration and in restoring American jobs.

The Wall — a viable plan or silly campaign promise? The way it is right now, Mexicans, Africans, Cubans, and Asians are lined up at the border because they know that once they get in, the chances of getting deported are close to zero. In California you have the TRUST [Transparency and Responsibility Using State Tools] Act, you can get a driver’s license, you can qualify for in-state tuition, you can qualify for a professional license. It’s an extremely welcoming environment for illegal immigrants, but it just isn’t possible to provide humanely for all of these individuals.

How do lawmakers respond to the CAPS agenda? It’s hard to get these guys engaged in mature conversation about the issues. They don’t want to hear it, and the default response is “You’re a racist and a xenophobe, and I don’t want to talk to you.”

What new legislation does CAPS support outside California? Senators Tom Cotton [R-AR] and David Perdue [R-GA] have introduced a bill we support that would redefine, and basically eliminate, chain migration. That’s when an immigrant comes to the United States and brings his wife and children; then after a certain amount of time, the wife becomes a citizen, and she brings her family members … and so on.

I’m guessing you’re opposed to birthright citizenship. Oh yeah, totally, totally opposed to that. Just look at the birth tourism industry, where hotels shamelessly cater to women who come to the United States in their third term for the specific purpose of citizenship.

What countries do you admire for their immigration policies? Japan comes to mind. It has limited immigration, limited refugees, and has a thriving economy. And they don’t have birthright citizenship, I can tell you that.

What’s your opinion on the concept of sanctuary cities?It’s completely baffling to me why [local] law enforcement would not want to cooperate with [federal] law enforcement … It just doesn’t make sense to me on the most basic level, and since Trump has come into office, I think for places like Santa Barbara to continue to defy the president’s explicit wishes is really playing with fire.

Santa Barbara hasn’t called itself a sanctuary city. Do you see it as one? I would say that any city that’s unwilling to cooperate with Immigration and Customs Enforcement (ICE) on immigration requests is certainly at least welcoming.

There are studies, though, that show cities with high immigrant populations actually have lower crime rates.To me, that’s a disingenuous argument … Go to the ICE website and take a look at the people they apprehend every day for kidnapping, rape, sexual assault against minors. If these individuals were not in the United States, they wouldn’t be committing those crimes against citizens.

If it’s all about population numbers, can deportation raids ever have an appreciable impact? I believe they send a much-needed message that the new administration is not going to tolerate the presence of criminal aliens in California or elsewhere in the United States, which will have a long-term effect on stabilizing California’s population. Plus, it’s entirely possible, in fact probable, that Trump will remove two million immigrants in his first term alone.

On the CAPS website you say, “Stop terrorists via new regulations for student and tourist visa holders that make their location and movements known.” Can you elaborate on that? California high school graduates now have to compete not only with their fellow graduates and kids from Arizona or New Jersey but also with international students. It becomes a question of what’s fair. Here you’ve got California kids whose families have paid into the system and supported universities in some cases for generations. Should that kid have the first shot to attend Cal, or should somebody who has never been to the state of California in their life and has never paid 10 cents to the tax base of California?

What about international students who stay in California, join its tax base, and contribute to the economy? I would say that only makes it worse because if they stay, and of course a great many of them do, then they’re competing in the same shrinking job market that we’re talking about. It’s not a very good deal for the California kids looking to get ahead.

Isn’t immigrant labor critical to our economy, not only in more skilled sectors but also to the service and agriculture industries? As for the service industry, it’s just not possible to make the argument that you can’t find Americans to work in the service industry. Certainly there are people who would take those jobs, part-time jobs. People who are trying to supplement the family income by working 30 hours a week at a hotel or a restaurant or a bar; college kids who are trying to save up for next year’s tuition. And as far as agriculture goes, I would say, look, fellas, it’s time for you to start focusing on automation, because that’s been successful worldwide.

How does CAPS feel about economic refugees? There are over seven billion people in the world, and the vast majority are poor. Not every solution to dire economic conditions should be resolved in the U.S.

What’s it like being a conservative voice in a mostly liberal community? There are a lot of immigration advocacy groups out there lobbying for more rights for immigrants. But what would really be best for the immigrants in the United States would be fewer immigrants. Good jobs are increasingly hard to find, schools are overcrowded, and roads are overcrowded — so the best thing for an immigrant, especially a brand-new immigrant who’s trying to find his way, would be if he had fewer immigrants to compete with.