Jorge Field of ICE Enforcement and Removal Operations makes his way to the raid to apprehend an immigrant without legal status who may be deportable in Riverside. Immigration and Customs Enforcement officials say they are relying more than ever on costly manhunts to locate immigrants in the country illegally who have criminal records.

More than 240 people were taken into federal custody last week across Southern California after a four-day sweep for immigrants with criminal records in the country illegally, authorities announced Monday.

The enforcement action ended Thursday with 244 foreign nationals in the custody of Immigration and Customs Enforcement — the majority of them with at least one felony conviction on their record, authorities said.It was the most successful four-day sweep of its kind in the region, ICE said. But an ICE spokeswoman cautioned against concluding that crime involving immigrants is up. 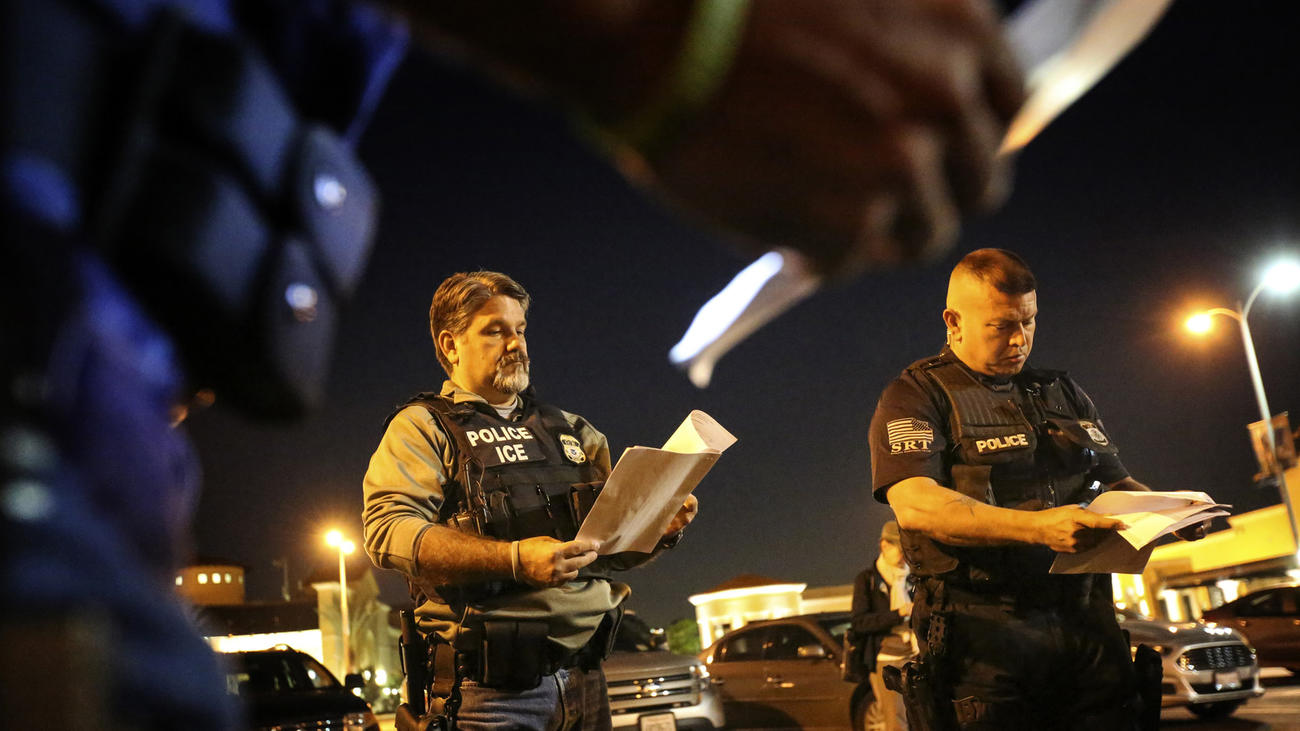 Federal agents are briefed before going out into the Riverside community to apprehend immigrants who may be deportable. In the past, the agency would simply contact local jails where such immigrants were being detained and ask jail officials to hold them until an ICE van could pick them up, but hundreds of counties across the country stopped honoring such requests after a federal judge last year found that practice unconstitutional.

It was the most successful four-day sweep of its kind in the region, ICE said. But an ICE spokeswoman cautioned against concluding that crime involving immigrants is up.

“One of the challenges we’re facing is because of state law and local policies, more individuals who are potentially deportable with significant criminal histories are being released onto the street instead of being turned over to ICE,” agency spokeswoman Virginia Kice said. “I think to infer from [the sweep] that potentially foreign nationals are committing more crimes is flawed.”

Among the people captured, 191 were from Mexico and the rest were from 21 other countries including France, Ghana, Peru and Thailand, the agency said. A majority of them had convictions for violent felonies or weapons or sex abuse charges.

The rest had past convictions for “significant or multiple misdemeanors,” ICE said in a news release.

Not everyone captured in the sweep was in the country illegally, Kice said. Some are documented nationals who may be deported because of a recent crime.

In the past, it was easier for ICE agents to locate and deport immigrants who had been convicted of crimes. The agency would contact local jails and ask that such inmates be held until an ICE van could pick them up.

But last year, a federal judge found that practice illegal, prompting hundreds of counties to stop honoring the detainer requests. As a result, ICE officials say they have to rely on costly and dangerous manhunts or multiday sweeps like the one conducted last week.

The sweep was led by the agency’s National Fugitive Operations program, which finds at-large criminals for deportation.

Originally formed to locate immigrants who had failed to comply with a judge's deportation order, the program is increasingly being used to find immigrants with criminal convictions who have recently been let out of jail. Of the more than 27,000 people whom ICE arrested nationwide last fiscal year, which ended Sept. 30, 2014, about 78% had criminal convictions, according to ICE data.

Among those captured was Vincente Onofre-Ramirez, 35, who authorities say was convicted in 2002 of sexual abuse with force in New York.

But not everyone arrested in the sweep was a violent felon. Those who have not been deported before and found to have illegally re-entered the country or aren’t facing new charges will have an administrative hearing with a judge.