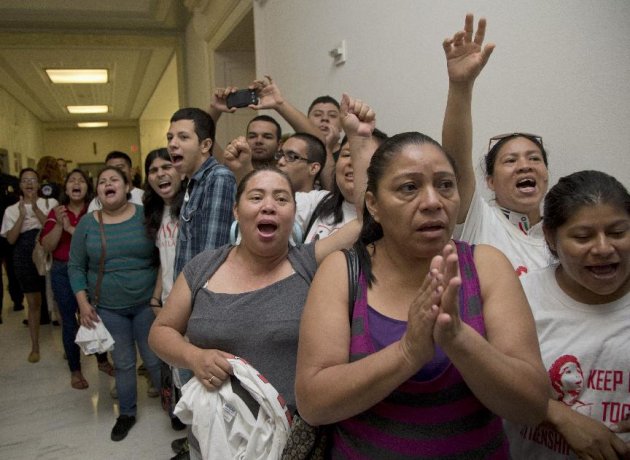 Associated Press/Carolyn Kaster – People shout out against the Strengthen and Fortify Enforcement Act in the hall outside the House Judiciary Committee hearing on Capitol Hill in Washington
By Erica Werner and David Espo
June 19, 2013

WASHINGTON (AP) — Illegal immigration into the United States would decrease by only 25 percent under a far-reaching Senate immigration bill, according to an analysis by the Congressional Budget Office that also finds the measure reduces federal deficits by billions.

Supporters of the legislation moving toward a vote on the Senate floor seized on the deficit-reduction findings by Congress' nonpartisan scorekeeping agency, along with the agency's forecast that the immigration measure would boost economic growth as millions of workers join the workforce and begin to pay taxes.

But the CBO report also found that the bill, which takes steps to prevent people coming to the U.S. illegally while offering the hope of citizenship to some 11 million people already here without authorization, does not come close to ending illegal immigration. Indeed some aspects of the bill would make the problem worse, the report said.

But a spokesman for Sen. Chuck Schumer, D-N.Y., a lead author of the immigration bill, questioned that CBO conclusion.

"The report does not question the toughness of the bill's border security reforms, it just assumes that some immigrants who enter the country legally will overstay their visas," said Schumer spokesman Brian Fallon. "But the bill creates a system to track people who overstay their visas and prevents employers from hiring them, so the number is likely to be much lower than CBO projects."

The issue arose as senators were jockeying over amendments to the legislation, which would allow tens of thousands of new legal workers into the country for jobs in everything from high-tech companies to hotels to agriculture. The bill also sets out a 13-year process whereby millions could ultimately obtain citizenship, as long as certain goals on border security are met first.

Republicans have contended those "triggers" aren't strict enough and have been offering amendments to strengthen these. Authors of the legislation say some of these efforts go too far and would delay the path to citizenship.

But Republican Sens. John Hoeven of North Dakota and Bob Corker of Tennessee were working on what they hoped could be a compromise measure that would lay out numerous specific steps for the government to take in order to secure the border, and potentially call for the government to demonstrate an ability to apprehend the vast majority of those attempting to enter the country illegally before anyone already present can obtain a permanent resident green card.

Hoeven and Corker were looking at packaging their amendment with others on enforcement issues by other Republican senators in hopes of building a bipartisan consensus for the bill.

"We have some people on our side of the aisle that just are not going to support the immigration bill, period," Corker said Tuesday. "But I think there are a number of people on our side of the aisle that, if we could just get it tailored a little bit with a few other amendments, might be willing to send it over to the House. And there are a lot of people who think it might come back over here in a little better form than it leaves."

The GOP-led House was confronting its own obstacles on immigration. Late Tuesday, the House Judiciary Committee agreed on a party-line 20-15 vote to approve a tough enforcement-focused immigration bill, over objections from Democrats and chants of "Shame, shame" from protesters. The measure would make being in the U.S. illegally a federal crime punishable by prison time, instead of a civil offense as it is now. It also would empower state and local law enforcement officials to enforce federal immigration laws.

On Wednesday, the committee was to take up a bill creating a temporary agriculture worker program.

The opposition among many House Republicans to sweeping action on immigration was on display Wednesday as Rep. Steve King, R-Iowa, an immigration hardliner, convened a six-hour press conference outside the Capitol to highlight opposition to the Senate bill. People in the crowd held signs opposing "illegal aliens" and criticizing Sen. Marco Rubio, R-Fla., a conservative author of the Senate bill, as "Obama's Idiot."

Opposition in his conference to any immigration bill with a path to citizenship put House Speaker John Boehner, R-Ohio, into a difficult position. On Wednesday, a day after trying to reassure House Republicans that he wouldn't bring immigration legislation to the floor without majority support from Republicans, Boehner was to meet with the Congressional Hispanic Caucus, which includes many liberal Democrats who are eager to see the House act on far-reaching legislation.

In the Senate, the bipartisan bill that President Barack Obama supports appeared on track for a final vote as early as July 4.

The CBO said in its report and accompanying economic analysis that the Senate legislation would raise economic activity in each of the next two decades, in part because of the legal immigration fostered by the measure and also because millions of workers currently in the country illegally would join the legal workforce and pay taxes.

CBO also said that the immigration bill would decrease federal red ink by $197 billion over a decade and $700 billion in the following 10 years as increased taxes paid to the government offset the cost of benefits for newly legal residents. The legislation would cost about $2 billion annually to implement over the next 20 years.

CBO also said that average wages would decline through 2025 as a result of the bill and that unemployment would go up slightly.