Heat and extreme drought have worsened smog in California over the last year, stalling decades of progress toward cleaner air and increasing health risks.

The state’s prolonged dry spells have brought more temperature inversions, with a layer of warmer air trapping cooler air below, concentrating pollution near the ground. Mother Nature could clear away much of the bad air with rain or wind, but high-pressure systems have resulted in fewer storms, less circulation and unusually stagnant conditions.

“There’s a steady trend of air quality getting better, but layered on top of that is the meteorology, which is a crazy, up-and-down thing that is very hard to predict,” said Anthony Wexler, director of the Air Quality Research Center at UC Davis.

Relief could come as soon as this winter — if enough storms blow in to stir up the air and sweep out pollution. 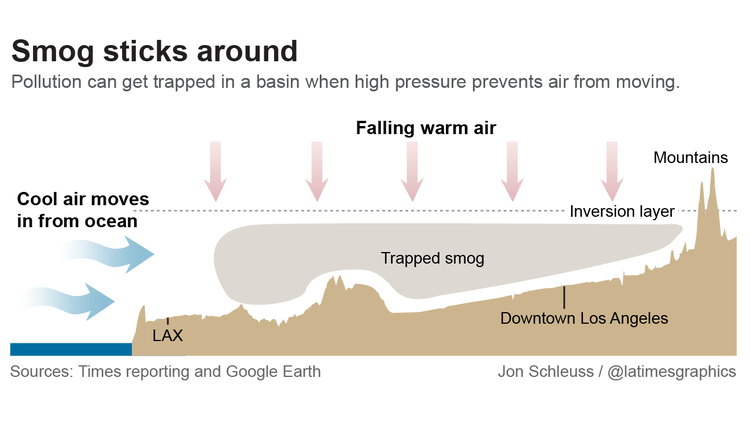 Forecasters say a weak El Niño has a 58% chance of developing in the Pacific Ocean this winter and could bring more rain to California, cleansing the air.

“Even absent an El Niño, if we can just get back to a normal winter, air quality will be significantly better,” said Seyed Sadredin, who heads the San Joaquin Valley Air Pollution Control District.

Over the winter, the district recorded the worst air pollution in more than a decade. And last week, the valley’s fine-particle pollution again jumped to unhealthful levels.

Many Californians have experienced the jump in pollution as more hazy vistas and bad air days. Others have faced noticeable health consequences.

“You see it, and for someone who has breathing problems, you feel it,” said Pati Calzada, 27, a college student who lives in the Inland Empire city of Colton, one of the smoggiest areas in the nation.

Both Calzada and her 7-year-old son, Abraham, who was recently diagnosed with asthma, have trouble breathing when pollution levels go up.

“It feels like a weight on my chest, and I know I’m not the only one,” she said. Her frustration with polluted air led her to join a Sierra Club campaign to advocate for solar power and other clean energy.

Hot, dry conditions also have led to increasing numbers of California wildfires, which release more smoke. And dry farmland has been kicking more dust into the air.

There’s a steady trend of air quality getting better, but layered on top of that is the meteorology, which is a crazy, up-and-down thing that is very hard to predict. – Anthony Wexler, director of the Air Quality Research Center at UC Davis.

When drought caused air pollution to increase across California last winter, conditions were worst in the San Joaquin Valley. Fine particles jumped to their highest concentrations since 2001, more than three times the federal standard of 35 micrograms per cubic meter.

The troubles continued this fall, as the valley and Southern California reported more bad air days from ozone.

Another unusual spell of high temperatures and a strong inversion layer hit the San Joaquin Valley last week, causing fine-particle pollution to build up to dangerous levels. The region’s air quality officials are telling residents to stop burning wood and reduce their driving. Activists have called for school sporting events to be canceled to protect children’s lungs.

Though air pollution is a year-round problem in California, it peaks in two distinct seasons.

In the summer, ozone is the main pollutant of concern. It is not emitted directly but formed after cars, trucks, power plants and factories release reactive gases and unburned hydrocarbons. Those pollutants cook in heat and sunlight to form ozone, a corrosive gas.

Breathing ozone can harm children’s lungs, trigger respiratory problems such as asthma and bronchitis and worsen heart and lung disease. On days with high ozone pollution, hospital visits for asthma rise and the risk of premature deaths increases.

Tiny particles emitted by diesel engines, fires and other combustion sources measure less than 1/30th the width of a human hair. They are of great concern to health experts because they are inhaled deep into the lungs and can impair breathing and damage the heart and blood vessels.

Chronic exposure to fine particles is linked to thousands of premature deaths a year in California, mostly from heart attacks and cardiovascular disease. Most of those fatalities occur in Southern California, where a 2010 economic study found that fine-particle pollution contributes to as many early deaths as traffic accidents.

Pollution regulators have downplayed the recent uptick in smog as a blip in a decades-long trend of improving air quality.

Peak ozone concentrations in Southern California are down to about one-third of what they were in the 1970s and ’80s. The region’s fine-particle pollution has been cut in half since measurements began in 1999.

Emissions from cars, trucks, ships, power plants and industrial facilities are falling because of local, state and federal regulations that ensure the air will keep getting cleaner in the long term, regulators say.

To meet a 2032 deadline to comply with current standards, the South Coast Air Quality Management District will have to slash smog-forming gases, called nitrogen oxides, more than 75%, regulators say.

Reaching that level will require near-zero emissions across much of the economy. And in the long term, rising temperatures from climate change will make controlling smog more difficult, posing new challenges in the district, which includes 16.7 million people in Los Angeles, Orange, Riverside and San Bernardino counties.

The San Joaquin Valley faces similar obstacles. Air quality officials say new rules adopted this year place the valley under the nation’s most stringent wood-burning restrictions, virtually banning the use of traditional fireplaces during the winter season to control a major source of lung-damaging soot.