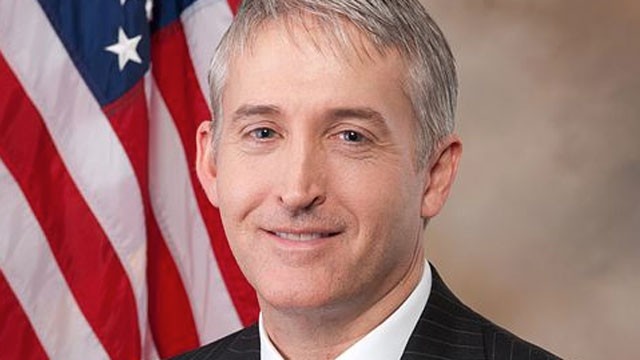 JOHN ROBERTS: I assume you heard Senator Schumer talking about immigration. He is fairly positive, he has a bold prediction: the House eventually will pass the Senate bill. What do you say?

REP. TREY GOWDY (R-S.C.): Well, I was moved, almost to the point of tears, by Senator Schumer’s concern for the future prospects of the Republican Party, but we’re going to not take his advice. The Senate bill is not going to pass the House. It’s not going to pass for myriad reasons. I support immigration reform; I think the current system is broken. But our framers gave us two legislative bodies, and I assume that they did it for a reason. The House runs every two years with the theory that we will be closer to the will of the people.

So, under the assumption that the framers meant to give us two legislative bodies and a House of Representatives with 435 members, we are going to work our will, like we have been doing for the past weeks. We have passed four separate bills out of House Judiciary and an additional bill out of Homeland Security. We’re making progress, and we will continue to do so. I’m more interested in getting it right than doing it on Senator Schumer’s schedule.

ROBERTS: Both Senator Schumer and Senator McCain, and I’m sure you’ve heard them both say this. There’s a lot of pressure being brought to bear on the House from a varied coalition of groups, some of whom have not traditionally sided with the democrats on much, let alone immigration. You’re got the U.S. chamber of commerce, you’ve got the growers, you’ve got labor unions, law enforcement and you have many churches who are saying to Republicans across the land, it’s time to pass immigration reform. Will you be able to resist the pressure that’s coming from those groups?

GOWDY: No, I don’t think it’s a question of resisting. I think it’s a question of meeting with the groups. And I have met with every one of those groups multiple times. The issue is not the broad principles of immigration reform and humanity and respect of the rule of law. Virtually everybody agrees on the broad principles. Where we have a difference of opinion are the details. So, everyone agrees on border security, for instance. But I cannot sell in South Carolina a border security plan where the security comes after the legalization. I can’t sell a border security plan where Janet Napolitano gets to tell us the border is secure. I can’t tell sell a border security plan when the executive can turn on and off triggers for politically expedient reasons, nor would I try to sell any of those plans.

You can agree in theory on border security but disagree very strongly on how it is achieved. You can agree on a path to legalization or citizenship, but whether border security is a condition precedent, which it would be in my case, is a very important distinction. I welcome the input of all these constituents and particularly the faith community. That matters greatly to me, as does law enforcement. Take the law enforcement for a second. The House plan allows state and local law enforcement to assist, if they want to, if they want to, to assist federal law enforcement in enforcing our immigration laws. That is non-starter in the Senate. The Senate is fine with law enforcement enforcing every other category of crime, from child pornography to murder to narcotics trafficking to bank robbery, but heaven forbid they get involved in immigration. The reason we have two bodies, the reason you have debate so you can take these broad principles and actually write them into legislation. And that is what we’re trying to do right now.

ROBERTS: When you look at the senate bill that just passed with a majority to 68, they didn’t get to the 70 they wanted, because they thought that that would put more pressure on the House. It’s a comprehensive bill. It’s kind of a soup-to-nuts approach. You are doing it much more bite-sized chunks. The chunks you’ve got so far out of Judiciary, increase in visas for highly-skilled workers, give state and local law enforcement greater authority in enforcement –we just mentioned that– create a new program for agricultural guest workers, and expand the use of e-verify…

There’s been nothing about citizenship. When you look at the 11 million people in this country illegally. There is, according to Senator McCain came on with us just a moment ago, there is a de facto amnesty in place if you do nothing.

Why do you feel the need to address all those other issues first before you approach the issue of a path to citizenship or the very least some sort of legal status?

GOWDY: John, I do agree what we have now is de facto amnesty, I have argued that from day one, but I also agree with this: There is a diminution of trust among our fellow citizens. And the notion that I can tell them we’re going to provide legalization, but trust us on the border security, trust us on the internal security, trust us on e-verify. That is not going to fly in South Carolina. I doubt it will fly in Arizona or New York. There is lack of trust in the institutions of government.

So what I think it’s important to tell our fellow citizens, we got the lesson from 1986. We learned our lesson. We’re going to have the security mechanisms in place, which is the respect for the rule of law, and then we’re show the humanity that defines us as republic. I’m fine with showing the humanity, but the order in which it is done is important.

You would agree with me that you should have a different level of scrutiny for a child who has been here for ten years, who was brought here as opposed to a 30-year-old that has been here for three weeks. You would want not want the same level of analysis for those two groups. So I know it’s tempting to speak of them as 11 million, as if they are all one group with the same characteristics. But the reality is there is number of sub groups that frankly are worthy of different levels of scrutiny. And I hope the house plan will have that.

ROBERTS: I want to switch gears.

Let me switch gears to the IRS. You want Lois Lerner back before your committee. Let’s go back to May 22 when she appeared before the committee and let’s listen to what she said:

LERNER: I have not done anything wrong. I have not broken any laws. I have not violated any IRS rules or regulations and I have not provided false information to this or any other congressional committee.

ROBERTS: She made a statement there proclaiming her innocence, and then promptly took the Fifth Amendment declining to testify, which is her right. You say, Congressman Gowdy, the way she did it, she had waived her Fifth Amendment rights, and the committee voted to say the same thing at the end of last week. You are a former prosecutor. What do you plan to do about it?

GOWDY: Well, you say that is her right. It is her right to remain silent. It is not your right to offer a lot of exculpatory information, to testify and then say I’m not going to be subjected to cross-examination. The right to confront witnesses and cross-examine witnesses is also in the constitution. It’s just in the sixth amendment and not the fifth. So, what are we going to do? I would hope that Lois Lerner would feel motivated to share the information she has with Congress, whether that’s in the form of a proffer or limited immunity agreement. I would like to have her information. But I have to be guaranteed that her information is accurate and truthful and complete. I am committed to getting to the bottom of what happened with the IRS, speaking of lack of trust in the institutions of government. But, I’m not going to buy a used car over the telephone. I’m not going to give immunity to Lois Lerner before I hear what she has to say, and before I can corroborate or not corroborate her information.

ROBERTS: Her attorney basically waived off what the committee decided last week, saying it has no legal impact. You said you hope that she would come before the committee. Do you have any legal way to compel her to come back and testify?

GOWDY: Well, unless your name is Jack Bauer you can not make people talk. We can bring her back but you can’t make someone talk. What you can do is incent them to talk. We do that all the time in the criminal justice system with proffers and limited immunity agreements.