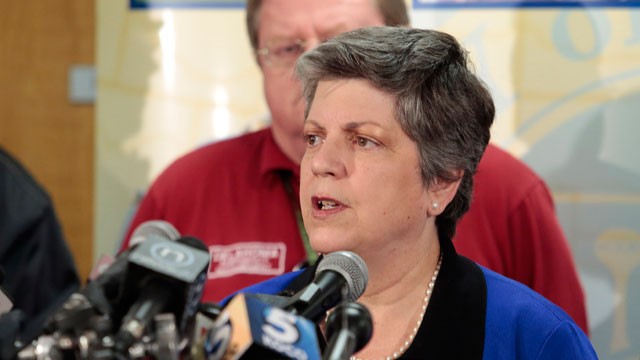 July 12, 2013—Janet Napolitano, the secretary of the U.S. Department of Homeland Security, will announce her resignation on Friday. She’s leaving in early September to run the University of California system.

Napolitano’s departure comes amidst the biggest push for immigration reform in decades.

The former Arizona governor was a divisive figure during her four-and-a-half-year tenure as the leading official overseeing immigration policy. Some saw her as overzealous with deportations, others as not hawkish enough.

But the real impact on the ongoing immigration reform effort won’t be Napolitano’s exit. It will be her replacement.

First let’s look at where we stand on immigration in Congress:

A bipartisan immigration reform bill steamrolled through the Senate last month with unanimous support from Democrats and with votes from more than a dozen Republicans.

However, the 1,200-page plan isn’t going anywhere in the Republican-controlled House of Representatives. They’d rather address immigration one issue at a time. And they aren’t in a rush to pass legislation of any type, much less something that might be palatable to Democrats.

That means that we could be entering a more combative stage of dealmaking over immigration in Washington.

And now, President Obama will likely need to choose a new immigration chief in the middle of it all.

We could be looking at an all-out brawl over who takes over the agency, which also oversees counter-terrorism measures and disaster response.

Democrats and immigrants rights advocates will want someone who will cut down on the record number of deportations that Napolitano oversaw during her time in the cabinet.

At the same time, conservative border hawks have sharply criticized Napolitano for prioritizing deportations. Under her watch, DHS has increasingly focused on deporting criminal immigrants and has allowed some undocumented immigrants to stay in the country and work legally.

Border hawks will want a DHS chief that will roll back those policies, and continue to step up deportations.

"Secretary Napolitano’s tenure at the Department of Homeland Security was defined by a consistent disrespect for the rule of law," Sen. Jeff Sessions (R-Ala.) said in a statement. "Any selection — interim or permanent — to replace Secretary Napolitano must disavow these aggressive non-enforcement directives or there is very little hope for successful immigration reform."

But even if you discount the tensions over immigration, getting any sort of nominee through the Senate has been a major problem for the Obama administration.

Republicans have used a technique called a "filibuster" to block the president’s nominees for various offices, essentially miring the process in endless discussion, unless legislators can muster 60 of 100 Senate votes and close debate.

The constant filibustering of appointees has led Senate Majority Leader Harry Reid (D-Nev.) to threaten to use a "nuclear option" in the Senate. Basically, he would change the rules so that Republicans couldn’t use a filibuster for presidential nominees. That would mean the nominees could be approved with a simple majority of 51 votes.

If Reid does go nuclear, that could mean the new head of Homeland Security could be approved without any Republican support. It would provide Obama leverage — he could choose someone who could infuriate conservatives, or pick a more centrist candidate in a play for more Republican support for his immigration policies.

But even with the filibuster, the appointment will likely lead to an ideological battle over the executive branch’s role in immigration policy.

And all of this could be happening while the House of Representatives grapples with immigration reform.

Another possibility is that the Obama administration stays with the person who will likely serve as acting DHS secretary after Napolitano leaves the position in September.

Alejandro Mayorkas, the current director if U.S. Citizenship and Immigration Services, is set to be confirmed as the deputy secretary of Homeland Security on July 30. If approved (as we mentioned, that is certainly an "if"), he would become acting secretary once Napolitano departs.

Leaving Mayorkas as acting secretary is probably the smoothest way to fill the position. And his appointment might be easier because of his experience in the role. But don’t expect that to stop this from becoming a partisan battle over immigration policy.