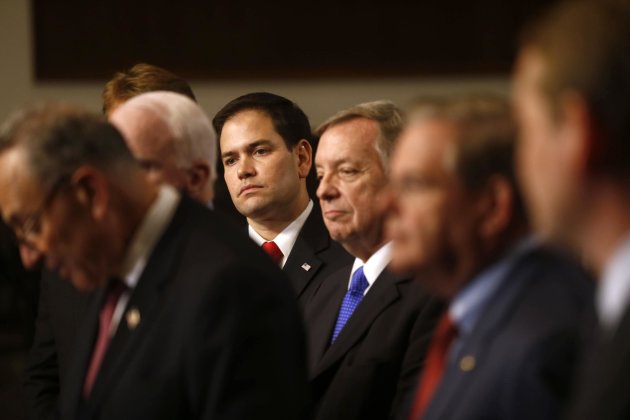 A landmark immigration bill in the Senate is facing a critical trial — whether it can survive hundreds of amendments from the left and right and still emerge relatively intact.

The test will begin Thursday before the Senate Judiciary Committee. As of Tuesday evening's deadline for filing amendments, some 300 had been offered by Democrats and Republicans. A number of them, particularly from the GOP side, would strike at the heart of the bill in a way supporters say would destroy the fragile agreement between four Republican and four Democratic senators who wrote the legislation.

These include measures by Sen. Jeff Sessions, R-Ala., to limit the number of immigrants gaining legal status under the bill and to require control of the border before anyone can receive legal standing. Sen. Chuck Grassley, R-Iowa, would tighten criteria for legalization and require a new electronic employment verification system be implemented more than twice as fast as the bill contemplates. Grassley, the committee's top Republican, filed the most amendments — 77.

Sen. Mike Lee, R-Utah, filed an amendment to greatly increase the number of new, lower-skilled worker visas under the bill — a figure agreed to in arduous negotiations between the U.S. Chamber of Commerce and the AFL-CIO.

"The intent seems to be to upset the careful bipartisan balance negotiated by the Gang of Eight in hopes of sinking the bill," said Frank Sharry of America's Voice, a pro-immigrant group. "The good news is this: If the pro-reform Republicans and Democrats on the committee hang together they should be able to stave off the attacks by opponents."

The immigration legislation, a top priority for President Obama, aims to strengthen border security, create new programs to allow tens of thousands of workers into the U.S. legally while requiring all employers to verify their workers' legal status, and give eventual citizenship to the 11 million immigrants now here illegally.

The Judiciary Committee includes four of the eight senators who authored the bill, and they plan to try to vote together in the committee to stave off poison pill amendments from either side that could upend their deal.

However, as of Tuesday afternoon these lawmakers — Democrats Chuck Schumer of New York and Dick Durbin of Illinois, and Republicans Lindsey Graham of South Carolina and Jeff Flake of Arizona — had not decided how to proceed on all issues.

That left some unanswered questions leading into the committee meeting.

Perhaps the biggest potential trouble for the bill loomed from the Democratic side, in the form of two similar measures filed by Judiciary Chairman Patrick Leahy, D-Vt., to extend immigration rights to gay citizens and permanent residents, allowing them to petition for U.S. residence for their partners just as straight married Americans can.

All four Republican members of the Gang of Eight have voiced serious concerns about such a provision, saying it could kill the bill or cost their support. Those objections are why it was left out of the bill in the first place, despite vigorous advocacy from gay-rights groups.

As of earlier this week, Leahy still was refusing to tell reporters whether he intended to offer a gay marriage amendment during the committee meeting. (Filing the amendment doesn't necessarily mean he'll officially offer it.)

And the two senators whose votes would be key — Schumer and Durbin — refused Tuesday to say whether they would vote for it if Leahy did present it, though both have expressed support for the goals of the provision.

"I don't know how serious it is, but I know there are some problems on the Republican side when it comes to dealing with these issues," Durbin said. "It could be problematic. But let's see if it happens and what it looks like."

Another potential point of contention surrounds visas for high-skilled workers, known as H-1B visas. These have long been sought after by high-tech companies such as Microsoft, and the bill greatly increases their availability, while also including conditions aimed at ensuring Americans get the first shot at jobs and limiting the use of H-1Bs by companies that would bring workers to the U.S. only to train them here and then return them overseas.

High-tech firms, while generally supportive of the immigration bill, are chafing at some of the conditions put on the visas, including how they must advertise jobs. Sen. Orrin Hatch, R-Utah, a high-tech champion, is offering a number of amendments aimed at addressing those concerns and giving tech companies more flexibility.

Hatch is seen as a potential swing vote on the committee, so members of the Gang of Eight may be eager to court his support by accepting his amendments. But Durbin has been the primary advocate for controls on H-1B visas and may frown on changes to the program.

"We want everyone as a `yes,' but I hope that we don't end up adopting amendments in the vain belief that picking up one more senator on one side or the other will pass the bill, and lose our basic agreement," Durbin told reporters. "We've got to keep the strength of this core agreement in place."

Sen. Marco Rubio, R-Fla., is not a member of the Judiciary Committee, but he's the Gang of Eight member working to corral conservative support for the bill, and has said repeatedly in recent days that the border security provisions of the bill must be strengthened in order to ensure its passage. Rubio is likely to advocate for some amendments making changes to the border measures, including requiring double-fencing along certain sections of the Mexican border, and toughening restrictions against allowing anyone with a criminal record to seek legal status.

It's not clear whether others in the Gang of Eight would accept all the changes Rubio is pushing.

Amendments also were offered to respond to the Boston Marathon bombings, allegedly conducted by two brothers of Chechen origin who sought asylum with their family years ago. An amendment by Graham would strengthen security screening requirements for immigrants from countries or regions thought to pose more of a risk to U.S. security.