A Toys "R" Us store in Totowa, N.J. The retailer replaced 67 employees with workers in India.  The Indian workers were trained by the American workers Toys "R" Us eventually laid off.

WAYNE, N.J. — When Congress designed temporary work visa programs, the idea was to bring in foreigners with specialized, hard-to-find skills who would help American companies grow, creating jobs to expand the economy. Now, though, some companies are bringing in workers on those visas to help move jobs out of the country.

For four weeks this spring, a young woman from India on a temporary visa sat elbow to elbow with an American accountant in a snug cubicle at the headquarters of Toys “R” Us here. The woman, an employee of a giant outsourcing company in India hired by Toys “R” Us, studied and recorded the accountant’s every keystroke, taking screen shots of her computer and detailed notes on how she issued payments for toys sold in the company’s megastores.

“She just pulled up a chair in front of my computer,” said the accountant, 49, who had worked for the company for more than 15 years. “She shadowed me everywhere, even to the ladies’ room.”

By late June, eight workers from the outsourcing company, Tata Consultancy Services, or TCS, had produced intricate manuals for the jobs of 67 people, mainly in accounting. They then returned to India to train TCS workers to take over and perform those jobs there. The Toys “R” Us employees in New Jersey, many of whom had been at the company more than a decade, were laid off. 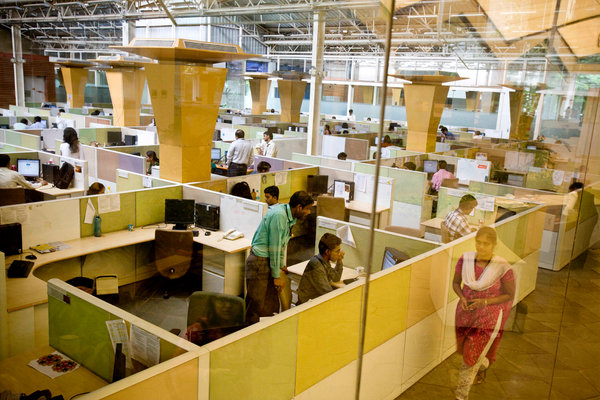 Tata Consulting Services in India in 2011. Toys “R” Us used its workers to replace Americans. Credit Kainaz Amaria for The New York Times

A temporary visa program known as H-1B allows American employers to hire foreign professionals with college degrees and “highly specialized knowledge,” mainly in science and technology, to meet their needs for particular skills. Employers, according to the federal guidelines, must sign a declaration that the foreign workers “will not adversely affect the working conditions” of Americans or lower their wages.

In recent years, however, global outsourcing and consulting firms have obtained thousands of temporary visas to bring in foreign workers who have taken over jobs that had been held by American workers. The Labor Department has opened an investigation of possible visa violations by contractors at the Walt Disney Company and at Southern California Edison, where immigrants replaced Americans in jobs they were doing in this country. Four former workers at Disney have filed discrimination complaints against the company. The companies say they have complied with all applicable laws.

But the Toys “R” Us layoffs — and others underway now at the New York Life Insurance Company and other businesses — go further. They are examples of how global outsourcing companies are using temporary visas to bring in foreign workers who do not appear to have exceptional skills — according to interviews with a dozen current or former employees of Toys “R” Us and New York Life — to help ship out jobs, mainly to India.

These former employees described their experience training foreigners to do their work so it could be moved to India. They would speak only on the condition that their names not be published, saying they feared losing severance payments or hurting their chances of finding new jobs.

The core purpose of the temporary work visas is to help American companies compete in the global economy. “If employers are able to hire the key people, they can keep jobs in the U.S. and create new jobs here,” said Lynn Shotwell, executive director of the Council for Global Immigration, which lobbies Congress for more visas for highly skilled foreign workers.

Outsourcing firms, and the companies hiring them, say they are careful not to violate any laws. But some experts argue the intent of the visas is being thwarted.

“At the very least, those are violations of the spirit of the law,” said Christine Brigagliano, a lawyer in San Francisco with extensive experience advising American companies on obtaining visas. “Those contractors are signing on the bottom line, saying we will not undercut the wages and working conditions of Americans. But, in fact, they are.”

The companies see it differently.

Kathleen Waugh, a spokeswoman for Toys “R” Us, said the staff reduction there was part of “designing a streamlined, more efficient global organization to make it fit for growth.” She said the contractors were required to comply with “any and all immigration laws.” The outsourcing, she noted, “resulted in significant cost savings.”

The federal government does not track how often American workers are displaced by workers with temporary visas, but this year, employees at a variety of companies report losing jobs to foreign workers. For example, at Cengage Learning, an educational publisher, about 30 accountants in Ohio and Kentucky were laid off on Sept. 11, after they spent five months training Indian workers from Cognizant, another outsourcing giant. The temporary workers and the jobs went back to India.

A Cengage spokeswoman, Susan M. Aspey, said the company needed to install higher-grade accounting systems. “To do this quickly and efficiently,” she said, Cengage sought support from Cognizant. Employees who were laid off were given “fair severance packages commensurate with their years of service,” she said.

Temporary H-1B visas are limited to 85,000 each year. In the last five years, federal records show, most of the companies that received the largest share of H-1B visas have been global outsourcing firms, including TCS; Infosys, another large Indian company; Cognizant, which is based in the United States; and Accenture, a consulting operation incorporated in Ireland.

Those companies also use another temporary visa, the L-1B, which has no annual cap and allows businesses to internally transfer their employees who have “advanced knowledge” from branches in other countries to offices in the United States. A spokesman for TCS, Benjamin Trounson, said it maintained “rigorous internal controls to ensure we are fully compliant with all regulatory requirements.”

At the Toys “R” Us headquarters on a leafy campus by a reservoir here in New Jersey, someone dressed as Geoffrey the Giraffe, the retailer’s mascot, often wanders around greeting employees to bolster company spirit. But the mood was hardly playful on the morning of March 3, when a company vice president summoned nearly 70 employees to a conference room and told them their positions would be transferred by the end of June to workers from TCS.

“We were asked to cooperate and show them respect and train them to do our individual job functions,” said another former accountant, 36, who had worked for the toy seller for almost 12 years. But, she recalled, “If you didn’t cooperate, you would be asked to leave.” 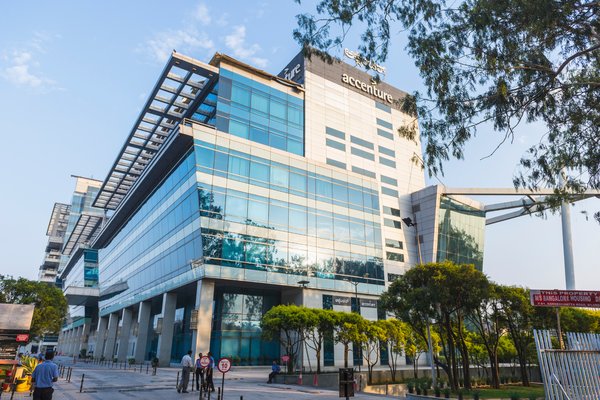 A Bangalore, India, office of Accenture, a consulting operation with $30 billion in revenues that has acquired many H-1B visas. Credit John Harper/Corbis

A few days later, TCS workers arrived to begin the training called “knowledge transfer.” Most had flown in days before from India and were staying at a La Quinta Inn nearby.

The 36-year-old accountant said the young Indian assigned to shadow her appeared to have no extraordinary knowledge of accounting. His expertise was in observing and mapping what she did.

“He was watching me like a hawk,” she said, remembering long hours at close quarters at her desk under the fluorescent lights of the accounting floor. “It took him a while to learn what I did.”

She had a hard time maintaining her composure. “I felt like, ‘Why am I sitting here showing this man how to do my job when they are taking it away from me and sending it to India?’ ”

Ms. Waugh, the spokeswoman, noted that Toys “R” Us employed about 33,000 people in the United States. She said the company offered workers “a severance package, including benefits and career transition services.”

The layoffs at New York Life were set in motion in 2014 when the company announced a $1 billion plan for an ambitious upgrade of its financial and data technology systems.

Since New York Life is not a technology company, said Mr. Werfelman, the spokesman, it turned to outside contractors for the upgrade. The company plans to cut about 300 positions, including up to one-fifth of its 1,400 technology workers, as well as some financial accountants. With 9,000 staff employees and 12,000 agents nationwide, New York Life is the largest mutual life insurer in the United States.

“We know there will be pain along the way,” Mr. Werfelman said. But he said that with new innovative technology, the company could rapidly expand despite the job cuts. He said it planned to hire 1,000 employees and 3,500 agents this year alone.

Accountants at New York Life were among the first scheduled for layoffs that started in May, under a contract with Accenture. The company’s accountants found out only by accident — when Accenture managers in India mistakenly sent out a group email with a full outsourcing plan — that the Indian workers they had been training for several weeks would be taking their jobs back to India.

One accountant said a worker from India made an exact digital “recording” during the day as he performed his job. At the close of business, the recording was transmitted to India, where workers practiced mimicking his tasks.

“It’s all just repeating exactly what we have been doing,” he said.

As a condition of his severance, he was asked to stay on for nine months to complete the training. The accountant, who at 26 was confident he would find a job elsewhere, preferred to resign.

An Accenture spokesman, James E. McAvoy, said it was assisting New York Life to build new global, 24-hour systems. He said H-1B workers were a small part of the Accenture employees involved; most were United States citizens or residents.

In July, about 100 New York Life technology workers were informed their jobs would be taken over by TCS, to be moved to India. At the insurer’s verdant campus in Sleepy Hollow, N.Y., and at offices in New York City, New Jersey and Georgia, tech employees began receiving individual layoff notices last week.

“After 30 years, it is very, very disappointing being told you are going to lose your job to a foreign country,” said one technology team member who is 49, and started with New York Life when he was 18.

Many tech workers facing layoffs are older, with years at the insurer. They were galled by executives’ statements that they were less qualified to learn the new systems than the foreign workers replacing them. “There are a lot of new technologies coming in all the time,” said an applications engineer in New York, who is 58 with 18 years at the company. “There is no reason at all we can’t do training for that.”

Some workers were not as dismayed, saying the company was offering generous severance packages.

But a hard irony for many of the New York Life employees losing jobs to immigrants is that they are immigrants themselves. They came to the United States a generation ago from the Philippines, Eastern European countries, and even India and raised families in this country. They followed the immigration rules — some coming as refugees, others with work visas and computer degrees from their home countries. Most became American citizens.

One technology manager, an immigrant from Europe, recalled that when he was hired at the insurer. “There was an open position that had to be filled,” he said. “Nobody lost their job because I got my job.”