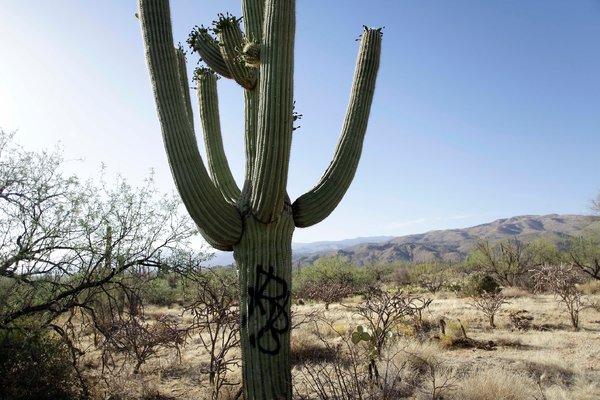 Graffiti on a cactus last week in Saguaro National Park in Arizona. Many of the giant cactuses are 150 years old.

SAGUARO NATIONAL PARK, Ariz. — When Steve Bolyard checked out a report of black paint on some of the park’s majestic saguaros — cactuses whose towering bodies and upraised arms are as emblematic of the American West as red-rock buttes and skittering tumbleweeds — he did not expect to see ganglike calligraphy covering more of them than he could easily count.

“It was too much,” said Mr. Bolyard, a park ranger. The same sort of symbols one might see on a subway train were scattered along the spiny forest last month. Rangers eventually found at least 45 graffiti tags in the park, including 16 on the slow-growing and fragile saguaro, the paint obscuring part of the green skins where the plants store the chlorophyll to draw nourishment from the sun.

It was the latest example of a trend that has been unnerving park officials from Rocky Mountain National Park in Colorado to Arches in Utah and Joshua Tree in California. Just as drought and rapid development have caused a rise in encounters between humans and wild animals on the edges of many American cities, the wilder side of urban life — vandalism, graffiti and litter — has found its way into the wilderness.

The cause of this recent spike in graffiti on public lands is unclear, but some park personnel say there is reason to believe that it coincides with the rise of social media. “In the old days,” said Lorna Lange, the spokeswoman for Joshua Tree, “people would paint something on a rock — it wouldn’t be till someone else came along that someone would report it and anybody would know about it.”

She added, “with social media people take pictures of what they’ve done or what they’ve seen. It’s much more instantaneous.” And that instant gratification could stimulate the impulse to deface.

While there has been graffiti in national parks since before they were parks, with covered wagon pioneers carving their names into cliffsides as they made their slow way west, this is something new, park officials say. Every year brings more incidents of a sort that evokes the kind of lawlessness and decay more associated with big cities.

“We just haven’t seen this type of vandalism in the past,” said Darla Sidles, the superintendent at Saguaro.

Vandals have spray painted over ancient petroglyphs and painted boasts on famous rock formations. They have chopped up precious plant specimens, knocked down stalactites and dumped just about anything you can imagine beside crystal clear streams.

Gannon Frain, 28, a frequent visitor to Western parks, has been accumulating photos documenting the destruction. “You get a lot of the ‘Kilroy was here,’ sort of thing,” he said. “A lot of people just think they are special — the rules don’t apply to them and they’ve got an inflated sense of self-worth about getting someplace remote.”

He added, “It’s one thing to see a pioneer’s inscription on a wall. It’s another to see the signature of the 1,237,000th of 2 million visitors.” In recent years, that sort of defacement has been on the increase, particularly in remote areas. And in Joshua Tree and Saguaro, it has escalated this year into wholesale vandalism of archaeological sites and remote vistas.

Few of the carvers and painters are caught. Cleanup costs run into the hundreds of thousands of dollars. “When budgets are this tight,” said Andy L. Fisher, the chief of interpretation and outreach at Saguaro, “it’s not like we have a slush fund to go and clean up vandalism. Dealing with this means we’re not doing something else.”

And while social media may be one reason for the recent rise in incidents, technology can work both ways. Ms. Lange said social media may prove helpful in tracking the origins of a graffiti binge that recently scarred ancient archaeological sites. Cleanup efforts have led to the indefinite closing of Rattlesnake Canyon, a popular hiking area, in part to protect possible sites of native art from copycat graffitists.

Among the other park units that count graffiti as an everyday problem are Glen Canyon National Recreation Area on the Utah-Arizona border, where hikers and boaters paint and carve their marks, and Rocky Mountain National Park, where graffiti has appeared at remote destinations like the Twin Owls rock formation.

Not all the graffitists get away. Trenton Ganey, 32, a motel manager from the coast of North Carolina, was caught by rangers at Glen Canyon in 2010 after climbing over a fence and scratching “Trent” next to an ancient rock art panel.

According to the affidavit filed by a court ranger, a local ranger queried a fishing boat captain who had taken visitors to the site around the time of the damage. The captain pointed out a pair of men about to get into a car. The ranger approached the pair asking for Trent; Mr. Ganey answered. He admitted he had scratched his name, thinking it would be “cool” to do so, according to court records.

Mr. Ganey pleaded guilty to a felony and is paying restitution of $10,100 in monthly installments of $105.

At El Morro National Monument in New Mexico in 2011, two South Korean exchange students added their own contributions to Inscription Rock, a treasured panel where 19th-century soldiers and pioneers etched their names. One wrote “Super Duper Dana,” the other, “Gabriel.”

Rangers later checked the visitor center sign-in book and saw the name “Dana Choi” followed by the comment “Super Duper Dana Choi.” Ms. Choi and another student, Seung Hoon Oh, later posted pictures of their trip on their Facebook pages. When contacted by park officials, they also admitted their acts, eventually pleading guilty to violation of a federal law protecting archaeological resources. They were fined nearly $15,000 each.

At Coronado National Monument in Arizona, which includes a popular cave exploration, graffiti of the “John-Loves-Mary” variety had been common. The superintendent, H. Lane Baker, said park personnel set up an infrared camera in the cave “to monitor wildlife; sometimes the wildlife happens to be human.” After the park publicized pictures of graffitists at work, two culprits turned themselves in.

When Saguaro was hit again last month by vandals who chopped up cactuses and left the carcasses by the Douglas Spring Trail, rangers had also set up a camera. They retrieved photos of two men taken by a wildlife camera.

The pictures were broadcast on news stations in Tucson and published on newspaper Web sites. The next day, Beau Campbell and Colton Salazar turned themselves in. They have been charged with violations of federal regulations protecting park resources, according to Ms. Fisher.

The earlier graffiti tagging of the giant 150-year-old cactuses represented an escalation that echoed far beyond the boundaries of this park.

“Tucson loves its Saguaro forests,” said Kevin Dahl, a Tucson-based official of the nonprofit National Parks Conservation Association. “It’s much more visceral than if they had thrown a rock through a window. It’s like they hurt a family member.”