The basic message: Immigration is good for the economy. Unfortunately, the chart is highly misleading.

Let's begin with what the chart leaves off: the effect on wages. According to the CBO, wages for both the lowest skilled workers and the highest skilled workers would decline for the first ten years after comprehensive immigration reform passed. The average wage across the economy would decline for the first decade. What's more, as the footnote indicates, unemployment would initially rise. The reason for both effects is relatively simple: the supply of labor would increase more quickly than capital available to employ the labor.

One thing to take away is that this is precisely the wrong time to reform immigration. We've been stuck with high unemployment and stagnant wages for way too long, especially for the lower end of the economy. Putting additional downward pressure on wages and employment is just cruel. Even if you buy the CBO's belief that things will eventually get better, is another decade of pain worth it?

The CBO says the effects on employment and wages will reverse direction after the first decade. But it is worth following the reasoning closely to see how highly speculative it is.

In CBO's view, enactment of S. 744 would lead to slightly higher productivity of both labor and capital because the increase in immigration—particularly of highly skilled immigrants—would tend to generate additional technological advancements, such as new inventions and improvements in production processes. CBO estimates that total factor productivity (TFP, the average real output per unit of combined labor and capital services) would be higher by roughly 0.7 percent in 2023 and by roughly 1 percent in 2033, compared with what would occur under current law. The increase in TFP would make workers and capital alike more productive, leading to higher GDP, higher wages, and higher interest rates. 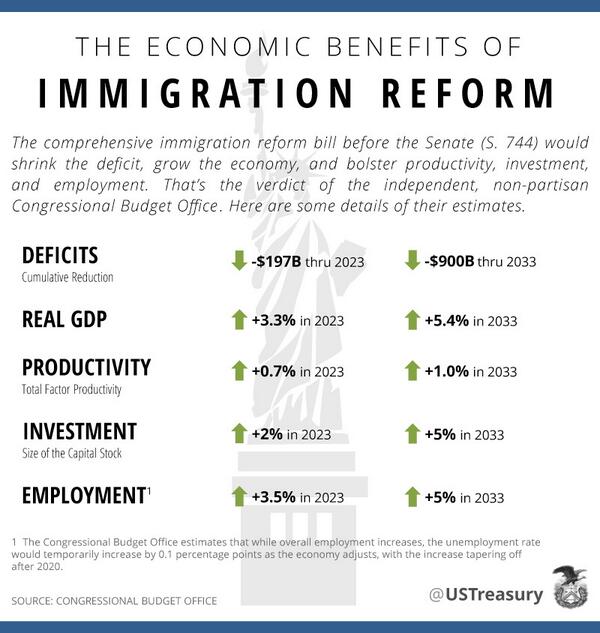 Well, maybe. Total factor productivity might increase like that. Or it might not. For instance, the new immigrants might be less productive than expected. The mix of native workers and immigrants workers may sap productivity. Infrastructure factors, such as roads and bridges, may be strained by newcomers, as economist Eric Rasmusen points out in a recent paper. In short, the expected innovation might not be as economically compelling as hoped. (For a more detailed and wonky take, see Eric Rasmussen's post on this.)

The CBO also claims that the economy would be 5.4 percent bigger in 2033 than it would be otherwise. Much of this growth, however, depends on the DBO's assumptions about increased productivity. Only a small part of it is purely due to having more workers around. If we relax these assumptions, at least some of the additional growth falls away.

What's more, even the CBO admits that some of this growth would benefit foreign investors. When the profits to foreigners are subtracted, the CBO's additional growth estimate shrinks to between 4.1 and 4.8 percent by 2033.

And keep in mind that this economic growth gets spread out over a much larger population. So immigration reform would shrink per capita Gross National Product by 0.7 percent by 2023. By 2033, it would rise by just 0.2 percent. Does a speculative 0.2 percent per capita growth increase really offset the decade of pain from immigration reform?

What the CBO does get right is that return on invested capital is likely to increase under the bill. What this means is that the richest members of the economy will benefit from the bill even as the poorest members suffer. It will act as a sort of anti-Rawlsian law, delivering the greatest benefit to the best-off in society. Inequality will grow under this law, rather than shrink.

Immigration may well be good for some parts of the economy. But as the CBO report makes clear, it will be at least somewhat painful for the poorest workers for at least a decade. All for a tiny bit of extra growth per capita.