Double Trouble: Illegal Border Crossings In January 2022 Twice that of 2021

As we recently blogged about, illegal border crossings last year were up and removals were down.

This trend from 2021 also seems to be continuing into 2022 as Fox reports that “62,573 migrants were released into the United States in January.”

There’s a fascinating tweet sent out earlier this week from Fox reporter Bill Melugin that was also mentioned in the story. 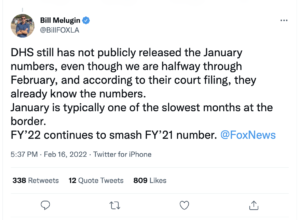 “DHS still has not publicly released the January numbers, even though we are halfway through February, and according to their court filing, they already know the numbers. January is typically one of the slowest months at the border. FY’22 continues to smash FY’21 number.”

If January is a slow month, one can only imagine the situation brewing when things get busier and more chaotic as the year goes on.