Desalination Is No Panacea

As California’s epic drought continues, many in the state are considering sea water desalination as a solution. The city of Santa Barbara, for example, is reviewing a plan to upgrade an existing desalination plant, at an estimated cost of $20 million. Supporters of this option for obtaining fresh water cite technological advances which make it more feasible than it was even a few decades ago. Also, there are literal oceans of sea water available to process.

Desalination may indeed offer some hope, but Californians should be aware that it is no panacea. Like so many technical fixes to provide our human necessities, it has its downsides.

Despite recent improvements, desalination is still very costly – about three times more expensive than obtaining water from traditional sources. Aside from the high cost of building and maintaining plants, the process of moving large quantities of sea water through reverse osmosis membranes – the basic way the system works – is one that requires huge outlays of energy. 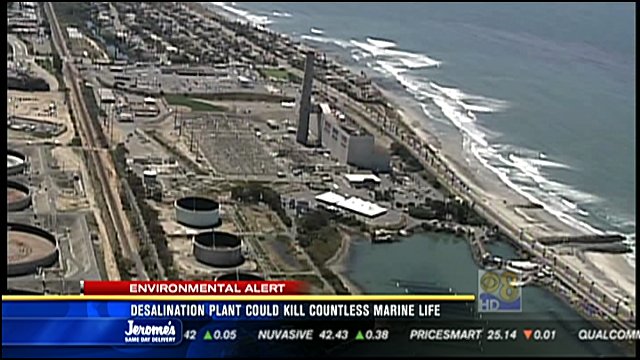 The environmental impact is another serious concern. One problem is that the intake pipes in the ocean that bring in the sea water also pull in and destroy huge quantities of fish and other sea creatures, thereby threatening local ecosystems. Another big problem is the residue left from desalination. About two gallons of seawater are necessary for every gallon of fresh water produced. The brine left over is a highly concentrated solution of salt and other substances, as well as chemicals used in the desalination process. This waste water, released back into the sea, is a significant source of pollution.

High salt content of the waste brine can upset the natural salt balance that sea creatures need to flourish. The processing also concentrates contaminates such as boron, endocrine disrupters and algal toxins (the latter a source of red tide). The chemicals from processing include chlorine, which can combine with other substances to create carcinogens, and poisonous heavy metals. This pollution can pose a direct threat to human health, or an indirect threat through the contaminated sea food that people consume.

Desalination critics also point out the possibility that increasing corporate control of the water supply could lead to higher rates for water through monopolistic control. According to a study done in four states, private water utilities charged more than publicly owned utilities.

Certainly it is possible that technological progress can mitigate the costs and environmental consequences of desalination, while regulation may ensure that companies don’t overcharge for water. Nevertheless, once again, desalination and just about any other technical fix will have liabilities.

Meanwhile, the population of California keeps rising, and consequently so does the demand for water. Now at a total of 38.3 million people, the state is projected to add 3.4 million more people by 2020 – scarcely more than five years from now. Much of this increase will be the result of our country’s present level of immigration. A reasonable step to ensure a sustainable water supply – one without cost and environmental degradation – would be to cut that level of immigration substantially.

Another reasonable step, which actually would save money and relieve environmental stress, would be to encourage the estimated three million illegal aliens living in California to go home by denying them benefits. Unfortunately, the state of California is currently determined to give them benefits, and thereby attract even more unauthorized foreigners to settle in the state and draw on the dwindling supplies of water.

If Californians and other Americans don’t want to deal with population growth as the drought continues, necessity will force some hard decisions, made harder by the unavoidable downsides.