To explore, enjoy, and protect the planet. To practice and promote the responsible use of the Earth’s ecosystems and resources; to educate and enlist humanity to protect and restore the quality of the natural and human environment; and to use all lawful means to carry out those objectives. 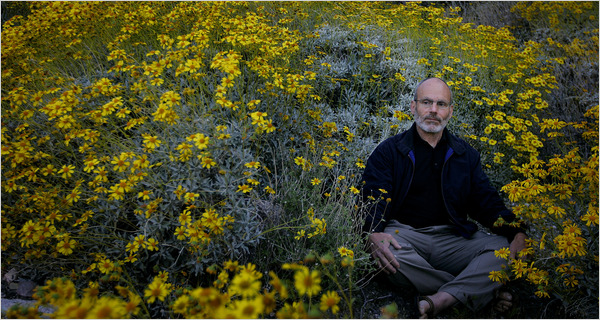 With the Sierra Club’s advocacy for “open borders” procured by multimillionaire David Gelbaum circa 2004, the above mission statement has become a meaningless paragraph of puffery, as the rapidly expanding population of the United States, driven by record numbers of immigrants, causes unprecedented environmental destruction and loss of wild lands.

Here’s a fawning profile about Gelbaum from the Los Angeles Times (The West 100 – THE POWER ISSUE – Our list of the most powerful people in Southern California, August 13, 2006):

You may never have heard of him and, at just 5-foot-5 with a slight build and soft-spoken demeanor, Gelbaum may not seem particularly powerful. But by donating more to conservation causes than anyone in the state – anonymously – this hedge-fund multimillionaire has taken a leading role in safeguarding something near and dear to the hearts of many here: the outdoors. Under the guidance of politically savvy environmentalist David Myers, Gelbaum’s gifts have protected enough mountain and desert land to create another Yosemite National Park, and his donations to wilderness education programs have sent nearly half a million inner-city schoolchildren to the mountains, desert or beach, many for the first time. Crucial tracts of the Mojave National Preserve have been protected, thanks to the Wildlands Conservancy, which Gelbaum cofounded. These days, the conservancy finds itself in the thick of the debate over the development of Tejon Ranch in the Tehachapi Mountains. The Gelbaum-backed group, along with the Sierra Club and others, wants to reduce the amount of the ranch that will be paved and preserve 245,000 acres as wilderness – a tussle that will help define the limits of growth in Southern California.

The Sierra Club’s open borders advocacy has become more strident with their support of a Washington, DC demonstration scheduled for today. I would not be surprised to learn that David Gelbaum is bankrolling this event.

To better understand how the Sierra Club has become in large part a proxy organization supporting open borders it is helpful to review a few paragraphs of another Los Angeles Times news story, this one from 2004:

COLUMN ONE – The Man Behind the Land

….In 2001, Gelbaum branched out with two back-to-back anonymous gifts to the Sierra Club Foundation that dwarfed all previous individual contributions to the club. The $101.5 million in donations led to a 10-fold increase in the club’s Youth in Wilderness programs and expansion of many other club activities….

….But he said Pope long had known where he stood on the contentious issue. ‘I did tell Carl Pope in 1994 or 1995 that if they ever came out anti-immigration, they would never get a dollar from me.’

Gelbaum said he was a substantial donor at the time but not yet the club’s largest benefactor. Immigration arose as an issue in 1994 because Proposition 187, which threatened to deny public education and health care to illegal immigrants, was on the state’s ballot.

He said he was so upset by the idea of ‘pulling kids out of school’ that he donated more than $180,000 to the campaign to oppose Proposition 187. After the measure passed, he said, he donated hundreds of thousands of dollars to civil rights lawyers who ultimately got the measure struck down in court.

Gelbaum, who reads the Spanish-language newspaper La Opinión and is married to a Mexican American, said his views on immigration were shaped long ago by his grandfather, Abraham, a watchmaker who had come to America to escape persecution of Jews in Ukraine before World War I.

“I asked, ‘Abe, what do you think about all of these Mexicans coming here?’” Gelbaum said. “Abe didn’t speak English that well. He said, ‘I came here. How can I tell them not to come?’

“I cannot support an organization that is anti-immigration. It would dishonor the memory of my grandparents.”

An excellent October 2009 Jerry Kammer article, “Strategic Negligence: How the Sierra Club’s Distortions on Border and Immigration Policy Are Undermining Its Environmental Legacy,” with 35 references, summarizes how the Sierra Club has been subsequently used as a tool for open borders advocacy.

As a former Sierra Club member, I found this sellout to be repugnant. I hope that the connection between overpopulation and environmental destruction will be restored by the Sierra Club and that they will repudiate the policies procured from 2004 to present by multimillionaire David Gelbaum and his allies.