Immigration advocates never tire of telling us that immigration brings economic prosperity. And to back up their claim, they have stables of economists who offer studies with ingenious explanations as to why this is so.

If what they are saying is true, then surely now after 40 years of the largest sustained wave of immigration in our history we should be reaching a pinnacle of prosperity. But if immigration is making us so rich, as these learned economists claim, then why are we feeling so poorly these days – particularly in comparison with what we had several decades ago? Certainly we’re not imagining this loss; some pretty solid statistics back it up. 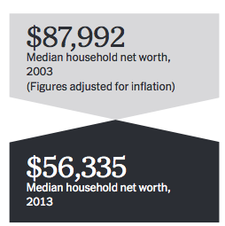 As the Pew Research Center reports, “The share of adults who live in middle-income households has eroded over time, from 61 percent in 1970 to 51 percent in 2013.” And even though our national productivity has increased significantly since the 1960s, our wage levels measured in constant dollars have not risen.

Immigration is not the only reason for wage stagnation, but it is one reason. Harvard economist George Borjas found that between 1980 and 2000 immigration reduced the wages of all native-born men by an average of 4 percent. For those with less than a high-school education the total was 7.4 percent. Borjas’ findings carry weight. Even the pro-immigration Wall Street Journal described him as “America’s leading immigration economist.”

Nevertheless, some prosperity boosters tell us not to worry because good times are just around the corner. The stock market is doing well, and unemployment has declined from a peak of almost 10 percent in 2010 to the current official level of 5.5 percent.

Well, not so fast. The fact of the matter is that, for a number of reasons, what happens on Wall Street is not an indicator of what is happening on Main Street. To get an idea of how average Americans are faring, consider the following statistics: Not surprisingly, many Americans have had to turn to public assistance to make ends meet. To illustrate, when the Food Stamp Program began in the 1970s, it served one person in the U.S. out of 50. Today the ratio is one out of seven.

Well, even if wages aren’t doing well, isn’t it at least encouraging that unemployment is down?

Unfortunately, that official figure is more of a mirage than a reality. The truth is the level of unemployment has not declined in terms of the total size of the workforce, which has fallen in recent years to its lowest level since the 1970s. Some mainly attribute this decline to elderly people retiring, but increasingly the dropouts from the workforce are working age people who have given up on finding employment and have taken such options as being supported by their families or pursuing education. A hard reality is that a growing number of elderly Americans keep working because they can’t afford to retire.

With respect to the official unemployment level, few commentators note that jobs added in recent years don’t pay as well as the ones lost during the recession. Also, the official figure only includes those who have actively sought work in the previous four weeks. It excludes about 2 million “marginally attached” workers who looked for employment during the past year. Nor does it include 7 million people who want full-time jobs, but can only find part-time employment – jobs that often pay low wages and last intermittently.

If the two latter categories are added to the official figure, the unemployment rate would be 11 percent. Further increasing hardship for unemployed native-born Americans is significant competition from immigrants. Since 2010, immigrants have taken 43 percent of newly created jobs.

Yet even as the economy has floundered for most Americans, the well-to-do have been doing pretty well. They commonly endorse mass immigration because they don’t usually feel its effects, and often they profit directly from it. Truly it enriches their economy, if no one else’s. Could their wealth be influencing the aforementioned studies? That certainly would make for some interesting research.

Sen. Jeff Sessions (R-AL) observed that “[A]s a matter of federal policy – which can be adjusted at any time – millions of low-wage foreign workers are legally made available to substitute for higher-paid Americans.” Can anyone honestly believe that continuing this policy is our pathway to wealth? For an answer, one can look at questionable studies – or simply study the real world.