While dozens of developed countries around the world have already achieved “zero population growth” (ZPG), global population growth as a whole, far from slowing down, has actually been accelerating in recent years, as I noted in a 2016 CAPS blog post.

In 2016 alone, 90 million people net (births minus deaths) were added to the world’s population, compared to “only” about 80 million per year a decade earlier. There are now more than 7.4 billion humans on Earth, with a net 245,000 added every single day. Each of these new consumers poses an additional drawdown on the biosphere’s beleaguered natural capital.

In other words, the need for family planning, birth control and contraception has never been greater or more urgent.

While it takes two to make a baby, for too long birth control has been regarded as the primary responsibility of women alone, perhaps because unlike their male sexual partners, basic biology dictates that females cannot escape the consequences of a pregnancy, whatever its outcome.

Other than the condom and coitus interruptus (withdrawal before ejaculation), both of dubious effectiveness – an estimated 82 to 98 percent for the former and 78 to 96 percent for the latter – options for men have been limited. Research into contraception for men by Big Pharma and even big nonprofit foundations interested in reproductive health, like the Bill and Melinda Gates Foundation, has notoriously languished.

Why is this? Some blame lack of interest on the part of males in taking a more active role in birth control, and therefore a small, unprofitable market for any new product that it takes years and many millions of dollars to develop. Others blame Big Pharma itself. Dutch ObGyn and gynecology professor Herjan Coelingh Bennink, who helped develop the contraceptives Implanon and Cerazette as head of research and development in women’s health for Organon International (a pharmaceutical company) from 1987 to 2000, told Bloomberg:

“The fact that the big companies are run by white, middle-aged males who have the same feeling – that they would never do it [use a contraceptive for men] – plays a major role. If those companies were run by women, it would be totally different.”

For women, highly effective options for reversible, long-acting contraception include implants like Nexplanon, the intrauterine device (IUD, both progestin and copper), an injection or shot (Depo-Provera), the birth control pill, the patch and the ring. For men, these options include…well, nothing, zilch, zero and nada.

Women can also practice the fertility awareness method, also known as natural family planning, which does not rely on artificial contraceptives. Instead, natural family planners predict fertile days by taking daily temperature readings and monitoring vaginal mucus. An earlier, somewhat less effective version of this used to be called the rhythm method. But as a former girlfriend of mine from Marin County once joked: “What do you call those who practice the rhythm method? Parents.”

In any case, a fully reversible, affordable, long-acting, effective male contraceptive could become a valuable addition to the world’s medicine chest and efforts to stabilize human population. And it seems appropriate that this medical breakthrough is emerging not from a Big Pharma lab of Bayer, Pfizer, Merck or the like, but from a modest university startup in the heart of rural India. Due to the lack of support, this effort has been a long time coming: pioneering researcher Professor Sujoy Guha, now 76 years old, began work on this product way back in the 1970s and published his first paper on it 37 years ago.

Professor Guha’s technique is called Reversible Inhibition of Sperm Under Guidance (RISUG). In a 15-minute, noninvasive, nonsurgical procedure, a polymer gel is injected into the sperm-carrying tubes (vas deferentia) in the scrotum. This gel has a positive charge that acts as a buffer to negatively charged sperm, damaging their heads and tails, and rendering them infertile. When desired, the procedure can be reversed, and fertility restored, by a second shot that decomposes the gel, allowing sperm cells in the vas deferens to reach the penis normally.

RISUG is still undergoing yet another round of testing in India. To date, animal and clinical trials have indicated that it works with almost-perfect results and with no serious side effects. 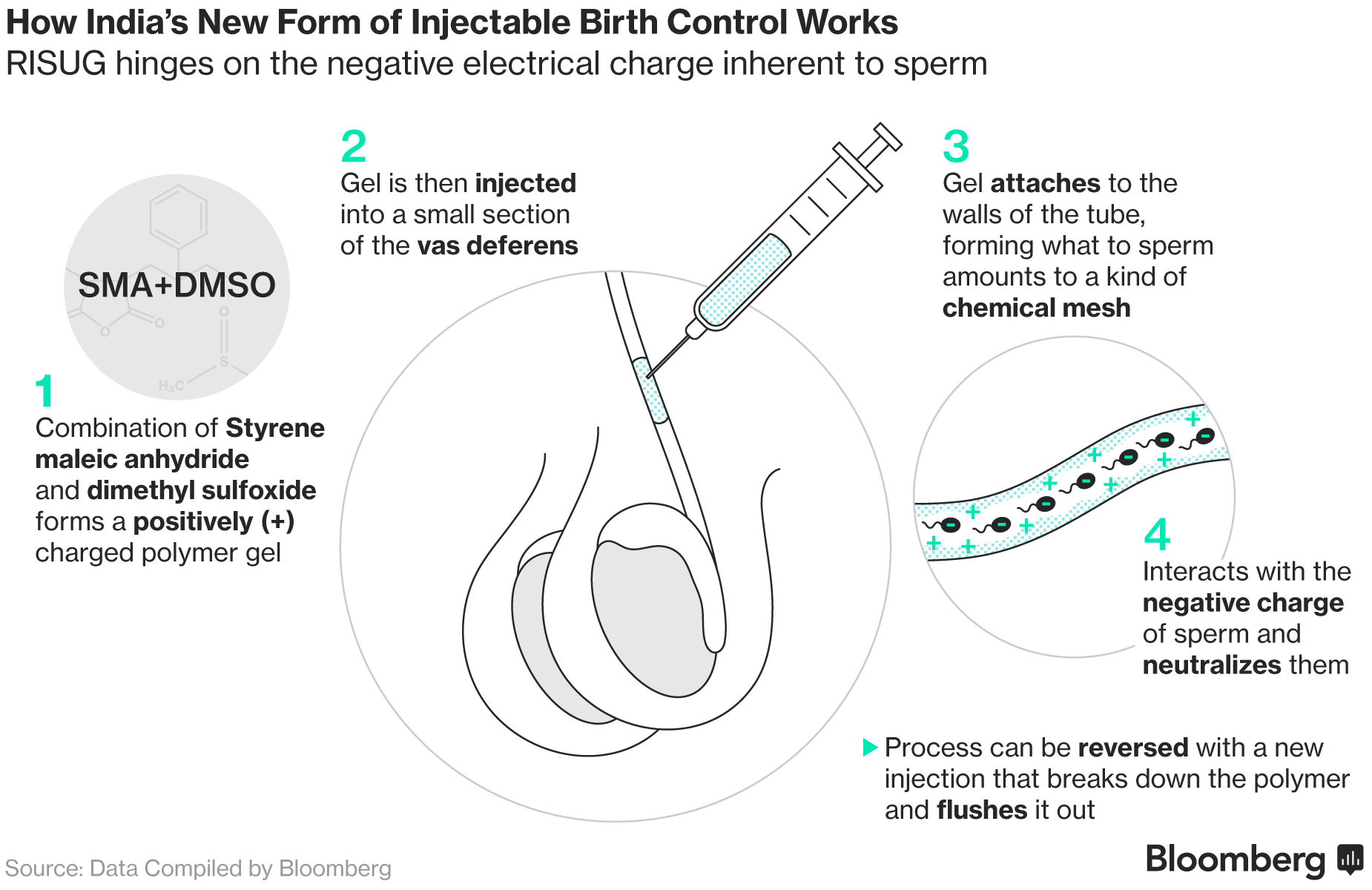 Bloomberg reports that RISUG, by offering males the option of fertility control that can last up to a decade or more, has the potential to claim up to half of the worldwide $10 billion market for female contraceptives dominated by Big Pharma, as well as to undercut the annual $3.2 billion condom market. The RISUG procedure could cost as little as $10 in developing countries. And by furnishing men with long-lasting but reversible, effective fertility control, it addresses compliance issues and avoids the ongoing expenses associated with the female birth control pill (taken daily) and condoms, costs which can be substantial or even prohibitive for the poor.

RISUG could also help lighten the load on some of the 225 million women in developing countries with an unmet need for contraception. Despite this obvious promise, so far only a single U.S. nonprofit, the Parsemus Foundation, has taken up development of the technology abroad.

Parsemus has developed a product it calls Vasalgel, with a similar composition and application as RISUG, and acknowledges the seminal contributions of Professor Guha to the field of safe, affordable, long-lasting, reversible and effective male contraceptive research. According to Parsemus, Vasalgel is now undergoing animal testing, product qualification and safety testing. Human clinical trials are expected to start in 2018. Then federal regulators will need to approve it before it can hit the market.

Just how much difference a new, long-lasting but reversible male contraceptive will actually make in slowing and eventually stopping global population growth is anyone’s guess. Men (and women) have to want to control their fertility and limit family size to use contraception in the first place. As the Population Media Center has argued for years, traditional motivations favoring large family size and misinformation about the alleged risks of modern birth control methods are much larger factors in driving rapid population growth in high-fertility countries than the unmet need for contraceptives.