The multi-talented Hans Rosling is a Swedish medical doctor, scholar, statistician and public speaker, as well as a…[roll of the drums]… sword swallower (!!), a skill he demonstrated in one of his fabulous TED performances.

Rosling is Professor of International Health at Sweden’s Karolinska Institute and co-founder and chairman of the Gapminder Foundation. He is also a consummate showman with the timing of a stand-up comedian and the ability of, as The Economist vividly put it, “making data dance:”

Dr. Rosling's mesmerising graphics have been impressing audiences on the international lecture circuit, from the TED conferences to the World Economic Forum at Davos….[he] uses Lego bricks, IKEA boxes and data-visualisation software … to transform reams of economic and public-health data into gripping stories.

All of this has made Rosling an online superstar in short order. 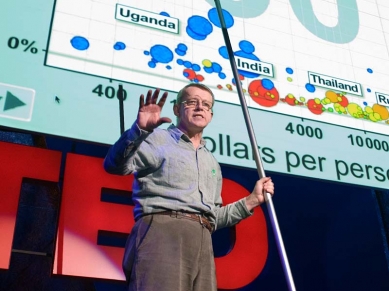 When it comes to population, Rosling claims to be neither an optimist nor a pessimist, but a “possibilist.” His upbeat message is well-received by audiences eager for hope in a world filled with too much despair, doom and gloom. “The biggest myth is that if we save all the poor kids, we will destroy the planet,” he says.

Rosling recently did a program for the BBC called “Don’t Panic: The Truth about Population,” which proclaimed the good news that “the population explosion will soon be over.” Despite his legions of fans, bold and brash statements like this have led to a growing chorus of criticism that, in a world still increasing by 80 million annually, he is getting ahead of himself by about a century.

According to his environmentalist critics, while Rosling may be a public health specialist, humanitarian and communicator extraordinaire, he is not an ecologist. These “population pessimists” accuse him of being a cheerful and chirpy Pollyanna, of peddling a mesmerizing but misleading message that conveys a sense of complacency about population – that the problem is solving itself, thank you. Moreover, he evinces no grasp of the ecological peril of the planet at existing levels of population and consumption, to say nothing of those much higher levels projected for the future.

As the UK group Population Matters says: “Rosling may be a good statistician, but he is an ecological illiterate.” They complain that humanity is already exploiting renewable resources 50% above a sustainable rate, and they worry that his widely disseminated “population problem just about solved” over-confidence may further erode the already inadequate priority accorded by governments and donors to family planning and women's empowerment programs.

Paul and Anne Ehrlich, the most prominent living population pessimists, accuse Rosling of being “confused,” and of ignoring a litany of environmental threats:

[his] soothing assurances are analogous to a physician telling her lung cancer patient, not to worry, don't get treatment. There's lots of good news: your teeth have no cavities, your vision is excellent, and I see no symptoms of flu.

TV critic Keith Watson says he doesn’t for a minute buy Rosling’s “glass half-full view of global statistics,” but that he “would like some of your happy pills to get me to the other side” of the crowded train station.

He’ll need those happy pills – a lot of them. According to Joe Bish of the Population Media Center, just days before Rosling’s BBC performance, a projected population increase of nearly 10 million over the next 25 years was announced for Britain –  from 63.7 million in 2012 to 73.3 million in 2037. Bish asks:

“Are we to believe this population increase will help the UK transition to a sustainable society? Relieve pressure on their island’s environment? Cut their global ecological footprint? Hans?”