When it comes to human overpopulation and the war it is waging on nature, the American environmental establishment has been AWOL for several decades.  Now comes a refreshing new anthology published by the University of Georgia Press that seeks to remind environmentalists of all that is at stake and make them reconsider their dereliction of duty. 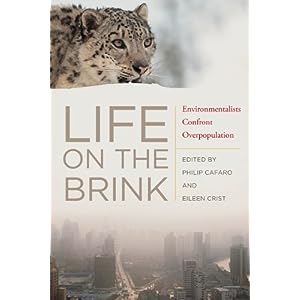 In Life on the Brink:  Environmentalists Confront Overpopulation (University of Georgia Press, 2012, http://www.ugapress.org/index.php/books/life_on_the_brink ), co-editors Phil Cafaro and Eileen Crist have marshaled a veritable who’s who of environmental and conservation leaders, scholars and activists in a collection of essays that tackles this touchy topic head on.  Cafaro is a professor of philosophy at Colorado State University, president of the board of Progressives for Immigration Reform, and the author of two prior books on environmental ethics. Crist is an associate professor in the Department of Science and Technology in Society at Virginia Tech and author of Earth Ethics in an Age of Crisis.

In addition to Cafaro and Crist, the contributors to Life on the Brink include:

As CAPS members know all too well, population isn’t ignored because it’s boring or passé, but because it touches on a plethora of compelling but emotionally-fraught and politically divisive issues, including sex, contraception, abortion, immigration, ethnicity, race, religion, culture, language, and limits to growth.  While the environmental establishment opted to avoid population and being called nasty names, it cannot avoid overpopulation’s many environmental impacts.

As the most populous state in America, as a place blessed with phenomenal natural beauty and rich biodiversity, and as one of the cradles of the conservation movement in America (the Sierra Club was founded here in 1892), it is not surprising that California has generated more than its fair share of population activism.  And indeed, no less than seven of the 26 contributors to Life on the Brink are or were based in California and/or are associated with CAPS.

In their foreword to the book, Paul Ehrlich and Anne Ehrlich of Stanford University contend that, “If projected rates of population and economic growth are fulfilled in the next several decades, safeguarding Earth’s precious store of living natural capital, and thereby permitting the support of further billions, will be virtually impossible.” While technology could hypothetically be “greened,” the record to date is not encouraging.

In her chapter, Martha Campbell of UC Berkeley’s School of Public Health asks: why the silence on population?   While there is no one simple answer, Campbell has valuable insights into the “perfect storm” of causes for population’s dismissal, and some good ideas on how to break the “spiral of silence” that stymies its return to respectability.

Canadian-born, seafaring Captain Paul Watson is a former California resident.  He would more properly be called a Citizen of the World or Guardian of the Earth’s Oceans.  The biocentric, unflinching Watson hits as hard on human overpopulation as he does on humankind’s destructive exploitation of the ocean’s living resources.  In his essay for Life on the Brink, he is as thought-provoking, and provocative, as ever, declaring that, “We have become like a deadly autoimmune disease to Earth, killing the essential crewmembers as we overload our spaceship with human passengers.  This is not something that most people want to hear, and of course the anthropocentric response is outrage.”

In his essay “Confronting Finitude,” Richard D. Lamm, a member of CAPS’ advisory board, writes that:  “the hardest challenge in public policy is to change a policy that has been successful.”  Lamm cites immigration as just such a policy.  Why change it then, he asks. Because the world has changed, he answers.  “Americans now live in a cash-wage industrial society with no more virgin land.”  And this new reality compels us to “no longer blindly assume that all immigrants benefit America.”  Lamm goes on to urge Americans to urgently reconsider their public policies, which falsely assume infinite resources in a finite world.

Environmental historian Roderick Nash of the University of California at Santa Barbara authored the seminal book Wilderness and the American Mind.  In the current volume, he takes the long view, contemplating a vision of human inhabitance of the Earth in the fourth millennium. Peering more than a thousand years into the future, Nash advocates an “island civilization” scenario, entailing “human clustering on a planetary scale.”  Beyond the boundaries of these clusters would abound self-willed nature, a.k.a. wilderness.

Leon Kolankiewicz, yours truly, is a CAPS advisory board member and former California resident.  My essay “Overpopulation versus Biodiversity:  How a Plethora of People Produces a Paucity of Wildlife,” examines the increase in humans and the corresponding decrease in wildlife in North America, concluding that:  “Our species is unique, because here and now only we have the ability to destroy, or to save, biodiversity.  Limiting human population will not guarantee success, but not doing so means certain failure.”

Life on the Brink is recommended for all who truly want to save an America and an Earth worth living on.  As co-editor Phil Cafaro cogently writes, the contributors to this anthology:

…are committed to the idea that the human race can be more than an ever- gaping mouth swallowing the world.  We want to work toward a future in which humanity limits its appropriation of the biosphere, and wild nature continues to flourish.  In this way, I believe, we stand up for what is best in humanity.

Life on the Brink:  Environmentalists Confront Overpopulation can be ordered at Amazon.com or the University of Georgia Press, http://www.ugapress.org/index.php/books/life_on_the_brink