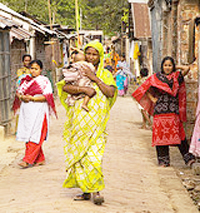 Shrinking the world’s population is one way to curb global warming, according to some environmentalists. To make that happen, women need to be in control of their own fertility. But those perspectives are very controversial. On this edition: how environmentalism can lead down a slippery slope to population control, and even anti-immigrant policies. Can an emerging movement for ‘population justice’ save our planet while respecting women’s rights?
Special thanks to Mary Wohlford Foundation for funding this program.
See below for the transcript.