Leo Perrero was laid off a year ago from his technology job at Walt Disney World in Orlando, Fla. Credit Brian Blanco for The New York Times

Even after Leo Perrero was laid off a year ago from his technology job at Walt Disney World in Orlando, Fla. — and spent his final months there training a temporary immigrant from India to do his work — he still hoped to find a new position in the vast entertainment company.

But Mr. Perrero discovered that despite his high performance ratings, he and most of the other 250 tech workers Disney dismissed would not be rehired for at least a year, and probably never.

Now he and Dena Moore, another American laid off by Disney at that time, have filed class-action lawsuits in federal court in Tampa against Disney and two global consulting companies, HCL and Cognizant, which brought in foreign workers who replaced them. They claim the companies colluded to break the law by using temporary H-1B visas to bring in immigrant workers, knowing that Americans would be displaced from their jobs. 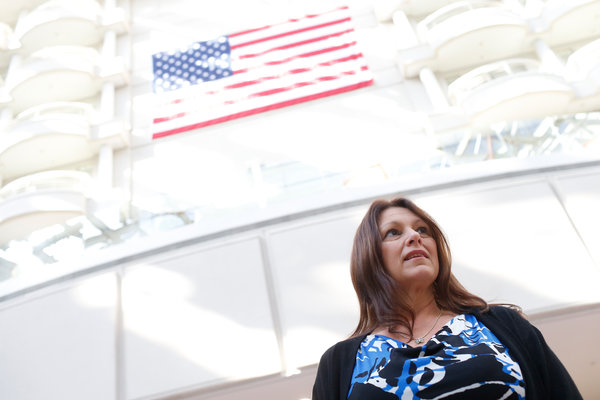 Dena Moore, another American tech employee who was laid off after years at Disney, said she applied for more than 150 Disney jobs and did not get one. Credit Brian Blanco for The New York Times

Ms. Moore had also trained her replacement. After she was laid off, she applied for more than 150 other jobs at Disney. She did not get one.

The lawsuits by Mr. Perrero and Ms. Moore, who each filed a separate but similar class-action complaint on Monday, represent the first time Americans have gone to federal court to sue both outsourcing companies that imported immigrants and the American company that contracted with those businesses, claiming that they collaborated intentionally to supplant Americans with H-1B workers.

A furor over the layoffs in Orlando last January brought to light many other episodes in which American workers, mainly in technology but also in accounting and administration, said they had lost jobs to foreigners on H-1B visas, and had to train replacements as a condition of their severance. The foreign workers, mostly from India, were provided by outsourcing companies, including the two named in the lawsuits, which have dominated the H-1B visa system, packing the application process to win an outsize share of the quota set by Congress of 85,000 visas each year.

The Labor Department opened investigations of the outsourcing companies — the direct employers of the temporary immigrants — at Disney and at Southern California Edison, a utility that laid off hundreds of American workers in 2014. The investigations are continuing. At least 30 former Disney workers also filed complaints with the federal Equal Employment Opportunity Commission, claiming that they faced discrimination as American citizens.

The lawsuits by Mr. Perrero and Ms. Moore are based on the rules for H-1B visas, which were designed by Congress to bring foreign workers with special skills into the country. Employers are required to declare to the Department of Labor that hiring foreigners on the visas “will not adversely affect the working conditions of U.S. workers similarly employed.”

Sara Blackwell, a lawyer in Sarasota representing the former Disney employees, said the suits charged that the companies lied under oath when they said that no Americans would lose their jobs.

Disney has vigorously denied any violations, saying it requires its contractors to obey all laws. Disney has said all but 95 of the tech workers laid off in Orlando were rehired to other positions or moved on voluntarily. Last year, it canceled 35 layoffs scheduled in other areas of the company.

HCL and Cognizant have said that they carefully comply with United States laws. Cognizant has said that it employs many thousands of Americans in this country, with H-1B workers only a minority of its labor force.

Responding to the frustration of American workers, Congress in December renewed and increased a fee on outsourcing companies that it had allowed to lapse. Larger companies employing many H-1B workers in the United States will pay an extra fee of $4,000 for each new H-1B visa — up from $2,000 — and another $4,000 to move an H-1B immigrant who is already in the country to a new employer.

Senator Bill Nelson of Florida, a Democrat who has been openly critical of Disney’s layoffs, offered a bill to reduce the H-1B quota by 15,000 visas a year to 70,000. The issue came up in the presidential race, as Senator Ted Cruz of Texas, a Republican candidate, introduced a bill with Senator Jeff Sessions of Alabama, a Republican hard-liner on immigration, to sharply increase the minimum wage for H-1B workers to $110,000 a year, to discourage outsourcing companies from using the workers to lower wages.

The Institute of Electrical and Electronics Engineers, an international association of tech workers, posted an online petition to encourage Americans who were displaced to file complaints with the Justice Department. In a letter to the group in December, Alberto Ruisanchez, a Justice Department lawyer in charge of prosecuting immigration abuses, confirmed that it would be a violation of anti-discrimination laws for an employer, or a contracting firm, to fire workers or hire replacements “because of citizenship or immigration status.”

Mr. Perrero, like many Americans who have lost their jobs, said he was long reluctant to speak out publicly against his former employer. At 42 and with a family to support, he worried that he would not find another job in Orlando, where Disney rules as the largest employer by far. He spoke with The New York Times anonymously in an article in June about the humiliation of training his foreign replacement.

Continue reading the main story 128Comments
But local recruiters told him that despite the company’s statements, Disney managers said they would avoid rehiring workers who were laid off. Mr. Perrero said he knew of only two workers from the close-knit group of more than 200 who were dismissed who went back to tech jobs at Disney.

Mr. Perrero said he was “part Italian, part English, part Swedish.” He said, “I wholeheartedly believe our country needs to have amazing people come here to build a long-term foundation.” But he said the H-1B program had been abused.

Ms. Moore said that even with strong programming credentials, it was hard for her to start over in her 50s with another company. She has 13 grandchildren, and she confessed that one of the difficult losses was a pass that allowed her to take them to Disney World at no cost.