The plan proposed by the 'Gang of Eight' fails on every major front. 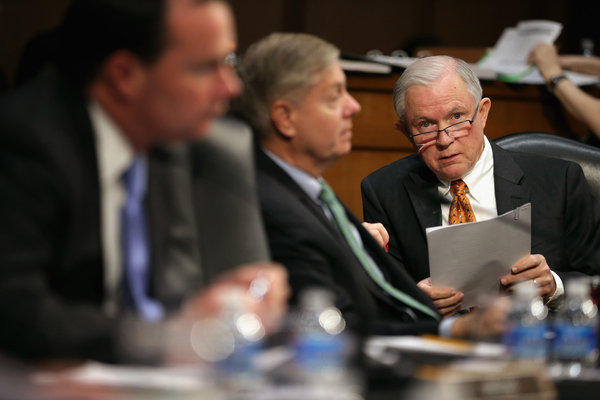 The so-called Gang of Eight immigration plan now being considered by the Senate fails to live up to every major promise made by its sponsors. Far from improving the immigration system, their 1,000-page proposal would exacerbate many of its flaws. It would dangerously undermine future enforcement while imposing substantial burdens on taxpayers and taking jobs and pay from U.S. workers.

Indeed, the two unions representing our nation's immigration and customs officers and those who process immigration applications have strongly urged opposition.

The sponsors' promise of enforcement first was broken when lead sponsor Sen. Charles E. Schumer (D-N.Y.) declared: "First, people will be legalized…. Then we'll make sure the border is secure." About 11 million immigrants who are here illegally — which includes 4 million who have overstayed their visas — would receive work permits, Social Security numbers and access to state and local benefits within six months of passage. The Department of Homeland Security merely has to submit a border plan, not accomplish that plan. Those legalized will then be free to compete for jobs at a time of low wages and high unemployment. It's amnesty first, not enforcement first.

Moreover, the bill allows the DHS or an immigration judge to stop any future deportation for humanitarian reasons, the public interest or family unity. Such open-ended waivers would all but ensure mass litigation and the end of immigration enforcement in America.

The sponsors promised that back taxes would have to be paid, but under the bill, if the IRS doesn't audit someone working off the books — which it isn't required to do — there will be no taxes to pay. There is no requirement that immigrants pay state or local back taxes or that employers pay back taxes.

The sponsors promised that people here illegally would have to learn English and civics, but the fine print reveals it will be at least 10 years before this is put into effect. And even then, the bill only requires those applying for permanent residency (a green card) to be pursuing a course of study "to achieve an understanding of English and knowledge and understanding" of civics. Furthermore, the secretary of Homeland Security can waive these already loose standards in many cases.

The sponsors promised that those "with a serious criminal background or who pose a threat to our national security" would be ineligible for legal status. But the bill allows the Homeland Security secretary, under certain conditions, to grant it to gang members; those with major misdemeanor criminal convictions (including felonies pleaded to misdemeanors) for serious crimes, including drug offenses, sexual abuse and prostitution; those with arrest records of any length; fugitives from deportation orders; or those who have been deported and illegally reentered.

The sponsors promised that people here illegally would not be eligible for public benefits. But, after the immediate grant of legal status, the legislation confers permanent residency within 10 years after passage (in many cases sooner), guaranteeing eligibility for federal benefits at a staggering long-term cost. In the short term, many would become eligible for state public assistance programs upon receiving the initial amnesty.

The sponsors promised the bill would prevent future visa overstays. The Government Accountability Office said in 2007 that without a biometric exit system, the DHS "cannot ensure the integrity of the immigration system by identifying and removing those people who have overstayed." The 9/11 Commission has said such a system is essential to national security. Congress passed six laws mandating the implementation of such a system at all air, land and sea entry points. But instead of finally requiring enforcement of these laws, the bill merely calls for a pilot system at a small sampling of airports, and excludes land ports of entry.

The sponsors promised that the bill would not significantly increase legal immigration. However, it will grant legal status to at least 30 million immigrants over the next 10 years if you add up the proposed surge in legal arrivals, approval of 4.5 million previous green card applicants, plus work authorization and legal residency for an estimated 11 million here unlawfully today. The number grows higher if you take into account the removal of annual caps on migration for immediate family members.

And, despite promised protections for U.S. workers, the bill would double the number of guest workers admitted annually. Such a large influx would be disastrous for the wages and job prospects of U.S. workers.

On every major front, this legislation fails to deliver on its core promises. It delivers only for the special-interest groups who helped write it. Should it pass, it would represent the ultimate triumph of the Washington elite over the everyday citizen to whom Congress properly owes its loyalty.

Jeff Sessions (R-Ala.) is the ranking member of the Senate Budget Committee.