WASHINGTON, D.C. — As congressional Republicans weigh whether to file a lawsuit against President Barack Obama for his executive actions on immigration, 60% of Americans say they are dissatisfied with the level of immigration into the country today. This is an increase of six percentage points from 2014, but is comfortably lower than the 2008 high of 72%. By contrast, one-third of Americans are satisfied with current levels of immigration. 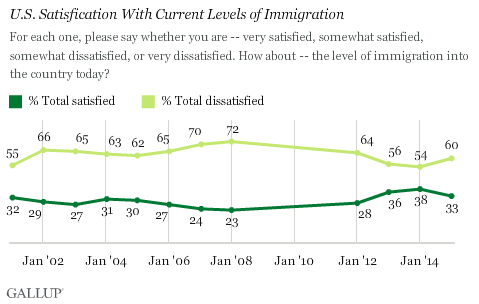 Few issues on Gallup’s annual Mood of the Nation poll saw such a drop over the past year in the number of Americans expressing satisfaction — or the corresponding climb in those voicing dissatisfaction — as the desired level of immigration. The poll, conducted Jan. 5-8, saw larger drops in such high-profile issues as the nation’s security from terrorism (10-point drop from 2014) and a 25-point decline in satisfaction with the state of race relations.

The increasing level of dissatisfaction with current immigration levels comes at a time when immigration is once again a major issue in the political debate. Late in 2014, President Obama issued an executive action protecting some immigrants who are living in the U.S. illegally from deportation. While the move has been politically popular for the president among Hispanic Americans, it is not without controversy. Republicans on Capitol Hill have vowed to undo the measures, and in fact the House has passed a spending bill that includes language to roll back the president’s actions. That legislation is unlikely to receive approval in the Senate, but it speaks to the broader partisan conflict unfolding on immigration.

Importantly, this survey question does not distinguish between legal and illegal immigration. While many Republicans, including Senate Majority Leader Mitch McConnell, are careful to say they support legal immigration, the party is nonetheless known for housing many outspoken politicians on this issue, such as influential Rep. Steve King of Iowa, whose anti-immigration rhetoric often does not distinguish between legal or non-legal status. 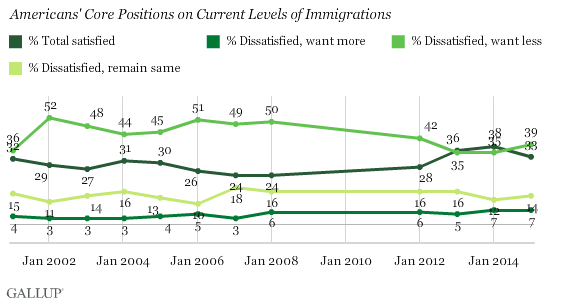 Fourteen percent of Americans said they were dissatisfied with the current level of immigration in the country, but did not express a specific preference for either increasing or decreasing it.

Republicans Most Dissatisfied With Level of Immigration

More than four out of every five self-identified Republicans say they are dissatisfied with the current level of immigration (84%), a figure that towers above the number of independents (54%) or Democrats (44%) who feel similarly. Moreover, the number of GOP affiliates saying they are dissatisfied on this issue swelled by 19 percentage points compared with 2014 — suggesting that the overall increase in public dissatisfaction with immigration levels is driven primarily by Republicans, perhaps in reaction to the president’s actions. However, even among Democrats, dissatisfaction increased by eight points this year. 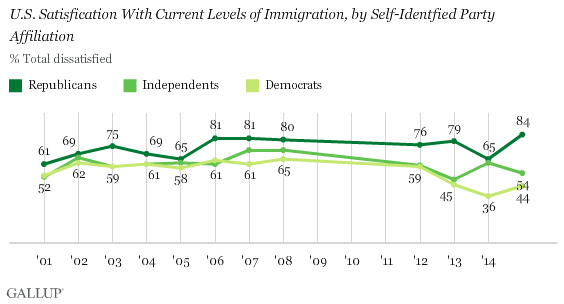 Republican lawmakers who oppose the president’s recent executive action on immigration are finding different venues to challenge the decision. This is happening via legislative measures, and will perhaps make it through the court system. The matter will likely weigh heavily on the upcoming Senate confirmation hearings of Attorney General-nominee Loretta Lynch.

Results for this Gallup poll are based on telephone interviews conducted Jan. 5-8, 2015, with a random sample of 804 adults, aged 18 and older, living in all 50 U.S. states and the District of Columbia. For results based on the total sample of national adults, the margin of sampling error is ±4 percentage points at the 95% confidence level. All reported margins of sampling error include computed design effects for weighting.