Flush with hundreds of billions of dollars in revenue from its humongous oil exports several decades ago, and understandably uneasy about its utter dependency on grain and food imports to feed one of the fastest growing populations in the world, Saudi Arabia embarked on a grand scheme to grow wheat in the desert using irrigation water from a fossil aquifer (one that is not replenished) beneath the dry, shifting sands of the desert kingdom.

As international commodity traders quipped, the Saudis would no longer have to “sell hydrocarbons to buy carbohydrates.”

But because the aquifer is a relic or “fossil” of an earlier, wetter geologic age – no longer replenished by rainfall and infiltration/percolation – it is a nonrenewable resource subject to depletion. In this sense, it is not unlike Saudi Arabia’s other great nonrenewable or fossil resource – oil – which is also pumped out of vast subterranean reservoirs that are not refilled.

Every gallon of water withdrawn amounts to “mining” the aquifer, since the water is not replaced. From the moment the first droplet of water was pumped upward and sprinkled onto wheat crops, this short-lived scheme’s days were numbered.

Now, Javier Blas at Bloomberg Business reports that the predictable and inevitable is happening: the wells are drying up. Aquifers that were pumped to irrigate wheat crops have depleted rapidly. In 2016, Saudi Arabia will import virtually all the wheat needed for its domestic flour consumption.

In spite of its scorching, arid climate, made even worse by global warming, the world’s largest oil exporter once harvested so much wheat that its exports of this grain also supplied its Middle Eastern Arab neighbors in Kuwait, United Arab Emirates, Qatar, Bahrain, Oman and Yemen. In the 1980s and ‘90s, the circular wheat fields, half a mile wide with a central sprinkler (center-pivot) irrigation system, bloomed across the desert. Every spring, for several decades, the bright green circles contrasted vividly with the beige desert background: a strange sight to behold for plane passengers above. 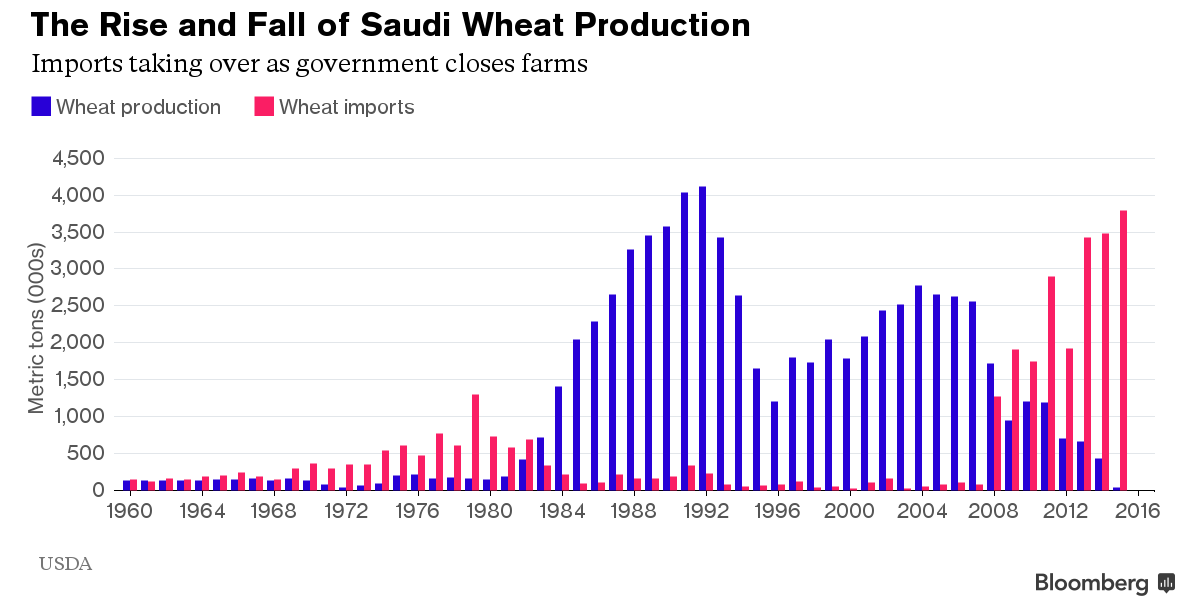 According to Bloomberg Business, the managing director of the Saudi government agency in charge of cereal imports has stated that Saudi Arabia will import 3.5 million metric tons of wheat in 2016: a ten-fold increase from about 300,000 tons in 2008, the first year local crop production was reduced. By 2025, demand is projected to increase by an additional million tons (to 4.5 million) as the Kingdom’s population growth drives demand for wheat flour. Saudi Arabia would then be among the 10 biggest wheat buyers on the international market.

As I pointed out in another CAPS blog post last summer, the high birth rate and explosive population growth of this very conservative, staunchly religious Muslim country have dire implications for crucial natural resources like oil, water and food. Rapidly growing domestic demand and depletion of these resources threatens Saudi Arabia’s well-being and perhaps even its survival.

Incredibly, the Saudi population is seven times larger than it was just five decades ago! In 1961 there were just 4.2 million Saudis, but by 2012, this number had shot up to 28.7 million. Oil wealth fueled this vertiginous growth. It was also oil wealth that allowed the Kingdom to pursue its ephemeral pipe dream of self-sufficiency in wheat for a few decades.

While Saudi Arabia’s fertility rate has fallen to about three children per female today (replacement level is 2.1) from much higher levels in recent decades, three is still high enough, alongside the demographic phenomenon of “population momentum,” to ensure utterly unsustainable, enormous, endless population growth, or at least until catastrophe and collapse intervene, and nature itself performs a cruel “population pruning.”

Whatever the ultimate magnitude of Saudi Arabia’s huge crude oil resources, the world’s largest, by 2050 Saudi crude oil output will be much lower than it is today, while its population will be much larger. How will it pay for massive food and grain imports then? It will no longer have the luxury of growing wheat in the desert. And it may no longer be able to count on its fallback strategy of “selling hydrocarbons to buy carbohydrates.”

Citigroup Inc. has predicted a once unthinkable notion: given current trends – population headed up and crude oil output eventually headed down – the nation with the largest reported oil reserves on Earth, and which dominated OPEC and the international crude oil market for decades as a “swing producer,” may itself need to start importing oil by 2030.

As I observed last July, this is indeed a slow-motion train wreck – “one long predicted and just as long ignored…that will probably affect the entire world.” In more ways than one.

It has been reported in recent months that the Saudis have offered to construct 200 additional mosques in Germany to help that country cope with a gigantic, uncontrolled influx of Muslim refugees and immigrants from the Middle East and other troubled Islamic countries and failed states (even as the Saudis themselves have refused to shelter any refugees and immigrants from among their own co-religionists).

Perhaps the Saudis are engaged here in some long-term strategic planning – thinking ahead to a time when they too may have to evacuate a region that rising temperatures and falling oil reserves and revenues will make virtually uninhabitable.

Saudi Arabia is a striking case study. It is a stark example of a country living well beyond its long-term ecological means – and of a population that has far overshot the carrying capacity of its harsh desert environment – temporarily catapulted to dizzying, unsustainable heights by the reckless exploitation and squandering of a nonrenewable, depletable energy resource.

I am reminded of the dramatic blooms of flowers that explode across deserts immediately after a rainfall. But these blooms are invariably fleeting, and soon wilt under the glare of the unforgiving desert sun and heat. Unlike these blooms, which are recurring, the bloom of glittering desert settlements that has sprung up in the Middle East will not survive oil depletion, because that was a one-time geologic endowment – and a one-off bonanza – that will never be repeated as long as humans survive on Earth.

It is no small irony that the burning of Arab Middle Eastern oil contributes measurably to the carbon dioxide emissions and rising CO2 concentrations in the atmosphere that are raising global temperatures and converting the desert regions of the Middle East into a fiery furnace.

Saudi Arabia is a fascinating and frightening microcosm of a world in which insatiable industrial civilization itself is on a collision course with limits to growth – and in which human beings continue in stubborn denial about any limits at all. But our grandiose, no-limits delusions are a mirage that, for a little while longer at least, we have the luxury to indulge in.