Fast food workers are demanding higher wages for the hard work they do. Some call for an increase of their pay rate, near minimum wage, to as much as $15 an hour, and a number of worker advocates agree, saying the solution is to raise the minimum wage toward that amount.

One response to this idea from employers might be to hire robots instead to keep operating costs down. According to a recent study from Oxford University, as many as 47 percent of current jobs in the U.S. will be automated within the next 20 years. With respect to the fast food industry, the researchers maintain that most of the food preparation and serving jobs will be done by machines, rather than humans, within the next few decades. Any sharp increase in wages will accelerate this process, and leave workers with no jobs at all. 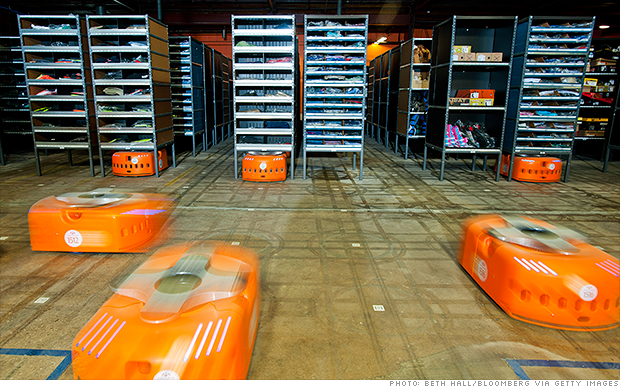 Robots in a number of fields already are beginning to make their presence felt. By the end of the year, Amazon.com, online sellers of books and other products, will have 10,000 robots filling customer orders, while a new robot named UBR-1 shows promise in doing other warehouse work.

Some jobs that robots may start doing in the near future include delivery driving, a task now performed by 3.1 million truck drivers in the U.S. Self-driving vehicles could be on the market within perhaps the next 20 years. Harvesting crops is a job that most Americans don’t want to do because of low wages and difficult working conditions. But fairly soon, those jobs might be eliminated with advances in robotic harvesting technology.

It’s not just hourly wage and blue-collar jobs where robots can be deployed. Some types of legal work may be automated, as well as medical tasks. An example of the latter is using machines to administer anesthesia.

One hurdle automation faces is a high start-up cost to purchase machines. But these costs should pay out over time as efficiency gains are realized from the equipment investment. Robots and other machinery, unlike humans, are always hard-working and obedient. And they don’t demand raises and breaks (except for periodic maintenance).

So as robots move into the workforce, just what kind of work will there be for humans? The techno-optimists say it won’t be a problem because technological advances have never failed to provide new jobs. To illustrate, when the automobile put horse-drawn buggies out of business, the unemployed buggy makers didn’t starve; they moved into new jobs as auto workers. Similarly, those put out of work today by robots can get new jobs designing and maintaining the robots.

Well, maybe. The problem is that the future doesn’t necessarily have to follow the past. In the past, new technology provided new jobs for people of average ability and talent. But the new high-technology jobs likely will require above average skills and abilities. So in that case, just what are average and below average job seekers supposed to do?

As our society tackles this problem, it would be wise for us to rethink our immigration policy, one which now permits a substantial flow of foreign workers into our country each year – even as millions of Americans cannot find jobs. Despite this situation, various interests are pressing Congress to further increase this flow, claiming that we are facing substantial shortages of both unskilled and skilled labor.

These alarmist claims of shortages are questionable, given our high unemployment rate. They are even more questionable in light of the Oxford study. Simply put, we should cut the influx of foreign workers substantially. If the Oxford findings are even close to correct, we’ll be challenged just to employ the people who are already here.