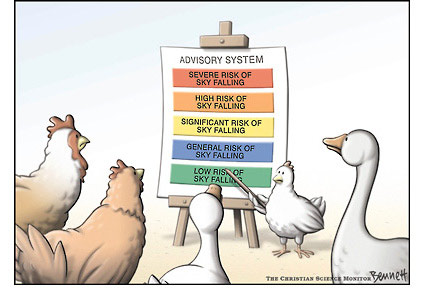 Doomsayers usually don’t get much press in America. We’re an optimistic country, and we tend to dismiss doomsters as Chicken Littles in search of a falling sky. Most of us take it for granted that nothing really bad could ever happen here, even if the country did suffer through the Civil War and the Great Depression.

But not all forecasters of sky-fall are bird brains and chicken hearts. Among doomsters with credentials are researchers, funded in part by the University of Maryland and NASA, who will soon publish an article in the journal Ecological Economics. Their studies, reports LiveScience, have led them to doubt “the common impression that societal collapse is rare, or even largely fictional.”

Indeed, the researchers argue, LiveScience reports, that “the rise and fall of great social structures is so common a theme in human civilization – recurrent throughout history and worldwide in scope – that it’s more the rule than the exception.”

Using a mathematical model, the researchers identified key factors that can lead to the collapse of any society, including our own. One of them was depletion of natural resources, and another was a greatly inequitable distribution of wealth. The latter makes a society unstable, and thereby less able to cope with fewer resources and other problems.

Today in the United States, rapid population growth poses a real challenge to a future of adequate resources at generally affordable prices. In 35 years, if present trends continue, we will add another 83 million people to our current population of 317 million. In that situation, to cite one example, our western states could face a water crisis, as more people draw down already depleted aquifers and rivers. And a continuation of California’s drought could make matters much worse.

Cocksure optimists (mirror opposites of Chicken Littles) will say not to worry because technology – somehow, some way – will save the day and keep the sky in place. Be that as it may, the time frame for this projected population growth doesn’t allow too much of a margin for error.

But even if there are technical solutions, we have little hope of applying them if we are not united as a people for the common good. And it is here that the second warning of the researchers comes into play.

Today, we face a growing trend of income inequity. In 1980, the top one percent of U.S. society received ten percent of income; in 2012, the total was 23.5 percent. Polls show that growing numbers of Americans believe elites are indifferent to their concerns. Opinion research also reveals declining trust in institutions, as well as weakened trust and unity among citizens.

Is there a solution? Yes, though few dare speak its name. It involves immigration policy, which now gives us the highest sustained level of immigration in our history. This flow will account for most of our projected population growth and the demand it will make on resources. Also, it increases our income divide by enriching many of our rich with profits from cheap labor, while impoverishing our poor even more by admitting large numbers of poor foreigners to compete with them. The level and diversity of current immigration overwhelm our powers of assimilation and undermine social cohesion.

The solution is to cut immigration to a more moderate and sustainable level. One isn’t a Chicken Little to point out this need. What’s chicken is the cowardice that prevents it.